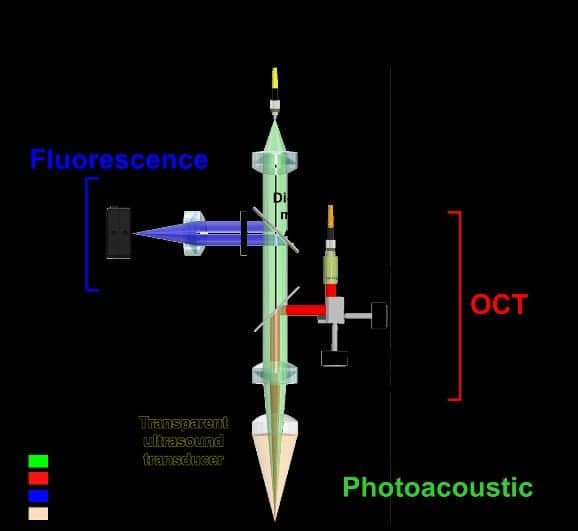 A quadruple fusion optical and ultrasound imaging system has been developed that enables the diagnosis of eye conditions or tumors, as well as the ability to see the environment inside the body using a transparent ultrasound transducer. These research findings are published in the Proceedings of the National Academy of Sciences.

There is a growing interest in multimodal imaging systems that obtain various images and information by combining ultrasound and optical imaging devices. Among them, an ultrasound transducer is a device that produces images by generating ultrasound and functions as an image sensor in ultrasonic examinations. But it was not optically transparent and difficult to let lasers pass through effectively, and therefore had limitations to be coaxially combined with an optical imaging device.

To solve this issue, the research team developed a highly sensitive transparent ultrasound transducer which the laser can effectively pass through. This newly developed device obtains quadruple fusion images of ultrasound, photoacoustic, optical coherence, and fluorescence in one imaging system for the first time.

Using the quadruple fusion imaging system combined with a transparent ultrasound transducer integrated into an ophthalmic imaging system, the researchers were able to observe the corneal neovascularization, structural changes, cataracts, inflammation, and other epidemiological changes in the rat eye.

In addition, when used as a tumor imaging device, the researchers were able to multiparametrically visualize the oxygen saturation of surrounding blood vessels and tissues in a melanoma-afflicted mouse without using a contrast agent. With molecular imaging, breast cancer diagnosis is now possible as demonstrated by acquiring and observing various images of a mouse with breast cancer through injecting a contrast agent that is harmless to the human body.

These research findings are anticipated to be widely applicable to various industries where ultrasound and optical sensors are used, such as the healthcare field. 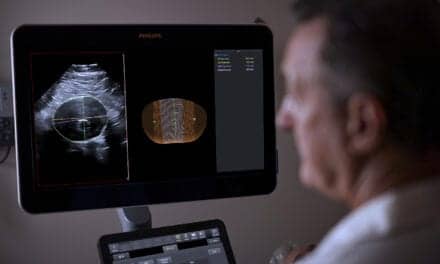 Lung Ultrasound in Children with COVID-19