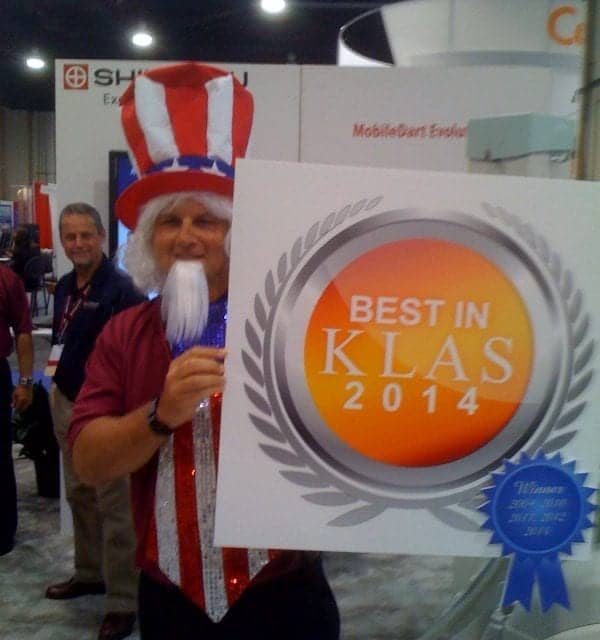 It’s no surprise that vendors exhibiting at the recent AHRA conference at the Gaylord in DC were showcasing new and/or improved digital radiography offerings. After all, challenged by tight budgets and multiple demands, radiology department admins and imaging center owners are looking for good value. At AHRA 2014, vendors were touting the ergonomics, efficiencies and cost-effectiveness of their DR solutions, which ranged from wireless detectors to portable units to DR software tools. Here’s a brief overview of what drew my attention when it came to DR.

The Shimadzu sales team celebrates a Best in KLAS at AHRA 2014.

I took my first steps into the exhibit Hall on Monday, August 11 and was greeted by a crowd—and a cacophony—in the Shimadzu booth. Apparently, the sales team decided to kick-off the company’s participation in AHRA by celebrating its 2014 Best in KLAS Award for its RadSpeed DR system. According to Tom Kloetzly, vice president, national sales and marketing, the manufacturer has captured Best in KLAS, “five out of six years in a row.” Apparently, 2013 was the year Shimadzu was passed over for the recognition, making the vendor a KLAS comeback kid this year.

Meanwhile, folks in the Carestream booth were talking up a new Motor Assist feature recently added to the Carestream DRX-Evolution System. By letting operators manually move the overhead tube but with assistance from the system’s motor, the manufacturer says fatigue on the part of the technologist may be reduced. A three-tiered level of motor assistance is set by the operator, which ranges from no assistance to low or high assistance. According to Helen Titus, Carestream’s marketing director of X-ray Solutions, “This feature provides smooth acceleration, deceleration and braking—all under the control of the operator.”

At the Fujifilm Medical Systems booth, I spoke with Rob Fabrizio, director of product marketing, Women’s Health and DR. The company’s portable FDR Go unit was among the products we discussed. Fabrizio pointed out the new secondary monitor on the column that allows technologists to view images closer to the patient, and also noted that it is a feature clinicians in the OR appreciate. The FDR Go is compatible with Fuji’s FDR D-EVO detectors, available in Gadolinium and Cesium models as well as a range of sizes including the wireless 24x30cm, which is ideally suited for neonatal trays. The company was also showcasing colorful graphics for the FDR-Go, which are available in three different themes that appeal to pediatric patients— like a playful underwater seascape.

From my observation, Agfa Healthcare was among the busiest booths on the AHRA exhibit floor. But it wasn’t just the company’s primo location; it was due to the fact that Agfa announced the North American launch of its DX-D Mobile Retrofit solution while onsite. Specifically, the solution offers providers an easy and cost-effective way to upgrade existing GE AMX 4 and 4 plus mobile X-ray systems to DR.

According to the folks at Agfa, the DX-D Mobile Retrofit for the GE AMX provides all of the benefits of DR in a mobile solution—including improved workflow and efficiency by speeding up exam time. The radiologist is able to view the X-Ray image seconds after the exposure is made, eliminating the need for time consuming processing of medical screen film cassettes. What’s more, X-ray images taken with the newly installed DR systems are immediately available for review and can easily be transferred and stored to the patient’s EHR—another key benefit in today’s challenging era of healthcare reform.

New to the Market

At AHRA, I discovered a brand new player in the DR field—Bayer HealthCare Multi Vendor Service. Approximately 5 weeks ago, the company launched its first DR product, the Acuity HD 1417 Wireless Detector. The cassette-sized detector features wireless technology that allows facilities to transform a conventional x-ray room into an efficient DR suite, according to the manufacturer. The Acuity HD 1417 is lightweight—weighs just 7lbs—and delivers fast, high-resolution digital images, making it beneficial for those facilities looking to increase patient throughput. According to Kristin Pichora, Strategic SVC Marketing for Bayer, the company is targeting orthopedic facilities as well as the hospital market.

Meanwhile, a longtime player in DR—Viztek—introduced its new Ultra DR software at AHRA. The software is compatible with Viztek’s complete DR line and sold with the company’s exclusive passive trigger technology. The goal behind Ultra DR software is to make imaging smarter and broaden capabilities for radiologists and technologists. According to the manufacturer, other imaging software requires multiple screens for editing, but Ultra allows everything to be done on a single screen. That means better workflow and more time devoted to patient care. The software is customizable, too. Moreover, when paired with the passive trigger technology, x-ray resources are automatically detected, allowing panels to turn on without needing to interface with a generator.

I met with Viztek’s Steve Deaton, vice president, who said, “I’m hearing a lot about dose tracking at AHRA, but dose reduction is critical, too.” One of the benefits of the new Ultra DR software includes dose reduction technology, based on guidelines from Image Gently.  Deaton said the software automatically adjusts the dose when a tech inputs the age of a pediatric patient, for example, and there is a feature that also “tells you when to pull out the grid,” noted Deaton.

At AHRA, the message was clear: From better ergonomics to improving efficiency, from affordable options to dose reduction features, DR vendors are working hard to meet the needs of today’s healthcare providers. 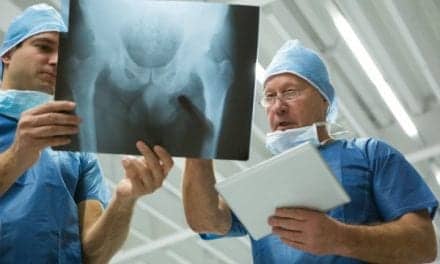