The picture archiving and communications systems (PACS) frontier is moving beyond the confines of radiology and into the cardiology department. And instead of setting up these systems in parallel, a number of trailblazing hospitals are integrating their radiology and cardiology PACS systems.

For hospitals like Baptist Hospital of Miami, Brigham and Women’s Hospital in Boston, and the yet-to-open Indiana Heart Hospital in Indianapolis, the push for integrated PACS has come from both administrators and physicians for the same reason. “From a quality of care perspective and from a cost perspective, an integration had to take place,” says Ramin Khorasani, MD, medical director of multidisciplinary PACS at Brigham and Women’s Hospital. “The options that were presented to all of us were that either we have an integrated solution or we don’t have a solution at all. We didn’t want to get into a position where…we had a workstation for cardiac catheterization and we had a workstation for chest x-rays right next to it.”

Strategies to set up an effective, integrated PACS system for both radiology and cardiology have included finding single vendor solutions, centralizing data storage, and setting up multidisciplinary teams.

At Brigham and Women’s Hospital, where radiology PACS has been in place for years, the opportunity to introduce and integrate cardioPACS into an enterprise-wide solution came with the installation of five new cardiac catheterization laboratories. “There were several catheterization-specific products that would have functioned very well in the environment, but Matt van Vranken, Brigham and Women’s COO, felt strongly that he did not want to create a new island of information,” says Maria Mastrocola Damiano, MBA, RT, director of operations for multidisciplinary PACS. “He wanted to see if there was a way that cardiology PACS could be done in conjunction with the existing radiology PACS.”

Khorasani echoes Damiano in crediting the hospital’s administration with moving the project forward. “They were the drivers and the visionaries for bringing an integrated solution to the hospital for imaging,” he says. “They requested radiology to support that. It really was an initiative from the hospital.” Because PACS is viewed as an institution-wide system and not as the exclusive territory of radiology, it is handled as a multidisciplinary program covering all  three hospital systems.

According to Damiano, when cardiology was being added to the PACS mix, the directors of radiology, interventional cardiology, echocardiology, and vascular ultrasound quickly came to realize the importance of PACS functionality inside and outside their departments. “Within their clinical departments, physicians would be able to access and view cardiac catheterization images, echocardiograms, cardiac MRIs, and chest x-rays,” she says. “In addition, images could be distributed to other clinical experts, such as cardiac surgeons and other specialists, who could see information immediately and make clinical decisions more quickly.”

The integration of radiology PACS and cardioPACS required finding a solution from a single vendor, according to both Khorasani and Damiano. “The goal is to have a single, enterprise-wide, multidisciplinary PACS,” says Damiano. “Choosing to go with two PACS systems would have resulted in financial duplication, such as needing side-by-side workstations, along with process inefficiencies and duplication.”

What this means for the clinicians is that they can access imaging information, regardless of the modality, from a single workstation. All imaging data is stored in a central multidisciplinary archive that can be accessed by primary care physicians across the system.

The shared archive is another benefit of multidisciplinary PACS. “By having a unified program, you have one archive, one infrastructure for the PACS, as opposed to having two or three archives,” says Khorasani. “If every imaging department had its own PACS, you could multiply the number of archives by the number of departments, and you would end up with duplication of services that will cost you a lot more money than you need to spend.”

Damiano adds that there are other benefits to having a central archive. “From an IT [information technology] perspective, the centralized architecture makes it easier to maintain optimal system performance and maintenance,” she says. “And it eliminates having to set up separate IT support structures.”

The enterprise-wide PACS system at Brigham and Women’s three hospitals-the 702-bed Brigham and Women’s, the 57-bed Dana Farber Cancer Institute, and the 130-bed Faulkner Community Hospital-includes more than 100 workstations distributed throughout radiology, the cardiac catheterization laboratories, echocardiography, vascular ultrasound, high-risk obstetrics, the intensive care units, neurosurgery, pulmonary medicine, and oncology. About 80 of these are diagnostic workstations. The system generates about 1.5 to 2 terabytes of information per month.

For Brigham and Women’s, PACS integration has not stopped. “There’s always more imaging data to bring on,” says Khorasani. The hospital will be adding the pathology department to its integrated menu of PACS systems during the coming year.

A cardiology PACS was installed at Baptist Hospital of Miami’s Miami Cardiac and Vascular Institute about 3 years ago. “It was installed because we felt it was a good opportunity to go filmless in the cardiac catheterization lab, and the technology was safe to invest in for the short term as it relates to cardiac images,” says Carol Mascioli, administrative director of the Miami Cardiac and Vascular Institute. At the time, this was the only PACS system outside of radiology. The radiology system is on a local area network (LAN) and not accessible outside of its department, nor is cardiology.

The decision to integrate the PACS systems for an enterprise solution came from the radiologists, and radiology and cardiology administration. “We could have added radiology PACS to cardioPACS,” says Mascioli. “My goal was to have this as a network based solution so my images could be seen [on a single workstation] in our hospital down the street and vice versa. I could have added anything on the local level, but that wasn’t my goal as far as where I put the resources and the dollars. It was the intention to expand the system for an enterprise-wide solution, not a departmental hospital-based solution.” She adds that the departments are working closely together to find a common solution.

To facilitate enterprise-wide implementation at Baptist’s four hospitals, a fiber-optic cable network was installed. In addition, Baptist Hospital will use only Digital Imaging and Communications in Medicine (DICOM) compatible equipment. “All of the different imaging systems that we will be looking at and installing will be required to be DICOM compatible so we can pass images and data from one to the other without expensive interfaces,” says Timothy Hawkins, vice president of Baptist Hospital of Miami. “All of the capital imaging equipment that we have purchased over the last 2 to 3 years is also DICOM-compatible, so it will interface with whatever PACS systems we acquire.”

Mascioli and the team are still in the process of choosing a vendor. “It may be multivendor or it may be one vendor,” she says. “I tend to believe we will go with one vendor, but I do not think it is impossible to use more than one vendor, and neither do my IT people….That remains to be seen.”

According to Mascioli, once an enterprise-wide system is implemented, both motion picture and still frame archiving can be done on a single system and both still and moving images can be accessible on a single workstation. However, there are still kinks that have to be worked out.

No matter how integration will be completed, the goal is always the same: an enterprise-wide solution. “[With an integrated system] patients will be able to move freely through the hospital [system] and all the images will be available no matter where they go,” says Hawkins.

Still a work in progress, the integration of PACS and cardioPACS will be driven as much by the enterprise-wide goal as it is from the IT department. “From an operational standpoint, the goal is for any physician to go to any terminal and pull up any image on a patient,” says Mascioli. “Where the image is stored and what server it’s on will be transparent to the user.”

Unlike Brigham and Women’s and Baptist Hospital, the Indiana Heart Hospital has the advantage of introducing an integrated PACS from the ground up. The $60 million, 210,000-square-foot Indianapolis-based heart hospital is slated to open its doors in December 2002, and is being touted as the first all-digital facility of its kind in the world. It will be affiliated with the Indianapolis-based Community Health Network.

For the Indiana Heart Hospital the drive toward integration was for an administrative benefit, not a clinical one, says Neal Bowlen, vice president and CIO. “We’re progressing with a very forward-thinking IT strategy in that we are going to be paperless and filmless,” he says. “The driver for that was the continued frustration as the result of nursing shortages-the staffing issues aren’t getting any better-and the continued demand from a compliance and accreditation perspective to limit medical errors, so performance and safety have got to be increased, and how do you balance those two?”

Bowlen says he and his team found the answer in an enterprise archive solution that would allow for the PACS integration of its three image-producing services-echo-cardiology, radiology, and cardiac catheterization-which eliminated the need for three isolated archives and three sets of personnel to support it.

The overriding principle was to find a vendor who could deliver a single PACS solution for the entire hospital. The vendor Bowlen and his team chose is delivering an integrated data solution that will include all patient data in an integrated electronic patient record.

This integration of its three imaging services-echo-cardiology, radiology, and cardiac catheterization-along with all other patient information through a single vendor will allow the physicians to view both text information and images at the same time and on the same workstation.

Bowlen’s work will not end when the hospital opens its doors. The hospital has a 5-year plan to integrate its PACS throughout Indianapolis’ Community Health Network. 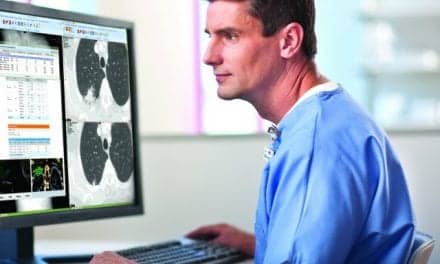