The underlying medical conditions facing young adults who undergo computed tomography (CT) exams represent a significantly greater health risk than that of radiation-induced cancer from CT, according to a new study published online in the journal Radiology.

CT utilization has grown approximately 10% annually over the past 15 years in the US, raising fears of increased radiation-induced cancers. However, discussions of radiation-induced cancer risk often fail to take into account the condition of the patients being imaged, according to Susanna Lee, MD, PhD, chief of women’s imaging at Massachusetts General Hospital and assistant professor of radiology at Harvard Medical School in Boston.

To better understand the risks and benefits of CT in young adults, the research team lead by Lee and researcher Robert L. Zondervan, MS, analyzed imaging records of patients 18 to 35 years old who underwent chest or abdominopelvic CT exams between 2003 and 2007 at one of three university-affiliated hospitals in Boston. Children and young adults are more susceptible to ionizing radiation and more likely to live for the approximately 10 to 20 years considered necessary to develop a radiation-induced malignancy.
The researchers had access to records from 22,000 patients, including 16,851 chest and 24,112 abdominopelvic CT scans. During the average 5.5-year follow-up period, 7.1% of young adults who underwent chest CT and 3.9% of those who had abdominopelvic CT died: figures that were much greater than the 0.1% long-term risk of death from radiation-induced cancer predicted by statistical models in both groups.

The most common reasons for exam were trauma and cancer for chest CT and abdominal pain and trauma and cancer for abdominopelvic CT. While many of the patients who underwent CT were cancer patients with a bleak prognosis, Lee pointed out that the major differences in risk were evident in the other groups who had CT, such as those suffering from trauma, abdominal pain and difficulty breathing. Lee and colleagues also found that the patients who were scanned only one or two times represented the overwhelming proportion of exams.

“This finding shows that radiation reduction efforts should also focus on patients who are very rarely scanned, and not just those who are scanned repeatedly,” Lee said. She added that the risk of radiation-induced cancer from CT likely would be lower today, making the difference in mortality even more pronounced. “We¹re not saying be complacent about the radiation risk from CT,” Lee said. “But these people being imaged might have been in a motor vehicle accident, or have a perforated appendix or life-threatening cancer, and we¹re trying to gain information from scans that can help them. That’s the part that gets lost in the debate.” 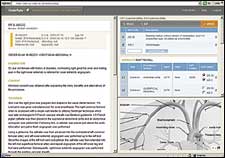