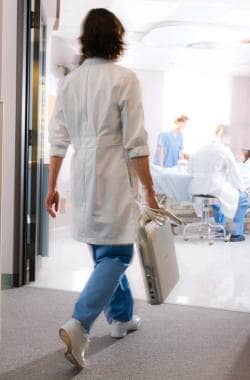 Providers capitalize on the value of portable and mobile imaging equipment.

Health care facilities of all kinds—from community hospitals to large, academic hospitals, and even some imaging centers—are reaping the rewards of portable/mobile imaging equipment. Manufacturers now offer a variety of mobile/portable x-ray units, CR/DR, and ultrasound. Clinical benefits include the ability to bring imaging to the patient’s bedside, ease of use, and higher image quality. These translate into the elimination of images going back and forth between the radiology department and the attending physician, automatic transfer of images between different clinical departments, and much faster development and replication of images. The result is greater efficiency and less time expended and, therefore, more cost savings.

“Units can range from 10x>12 to 14×17 inches, but a unique feature is that ours is very specific to pediatrics, with an 8×10-inch model for viewing images. This moves easily to a child’s bedside and was a huge selling point,” he said.

The fact that FCR Go 2 is wireless with a nontethered detector also makes it ideal for easy maneuverability in the limited space alongside a child’s bed. “This unit also has its own system redundancy, its own battery setup, so it can stand alone if the hospital experiences a power outage,” said Pandit.

“A great feature is that when it comes to the work lift, the staff can preset the machine for the child’s body size,” Pandit said. “But this automatic preset can also be adjusted if the patient is not comfortable, or the physician decides he wants to just zero in on, say, the abdomen.”

Also, continued Pandit, “You can pull the tube away from the unit, and this handheld control puts you in the driver’s seat. And there are two additional switches that allow you to make minor adjustments.”

What Pandit especially likes is that “the processor component is right behind the flat panel screen that can be pulled up like a computer screen, so you can both look at the images and receive a wireless work list.”

The initial unit Fujifilm delivered, Pandit said, “was a plain Jane factory beige. The nurses wanted a unit designed with sea creatures. Fujifilm complied. It seems to be appreciated by the staff, and the kids love it.” Also, because it is in a children’s section, there are two provisions to make sure only authorized personnel can turn it on. One is a key. The second is a hidden switch, which needs to be flipped.

The FCR Go 2 was purchased last August. “There have been no software or mechanical issues other than the fact that we had to replace the collimator this past week,” Pandit said.

There are two issues the staff brought up. One is that in locking down the tube to move from one location to the next, a tall person will have to stoop down to look over the tube and a short person will have to stand on tiptoe. The current design is for a person of average height. Also, the unit more or less drives itself, but if the operator has to stop and make a turn, the movement is a bit jerky. Pandit is confident the manufacturer will correct these minor deficiencies.

But, overall, Pandit and his staff are happy with the FCR Go 2. “We looked at and tested models from several vendors,” said Pandit. “We found nothing else that had the combined features of being able to differentiate age and size, the 8×10-inch model for viewing, the instant viewing and quality of images, as well as it being a lot more efficient, and wired, with no tether.”

In the ER, Orthopedics, and Beyond 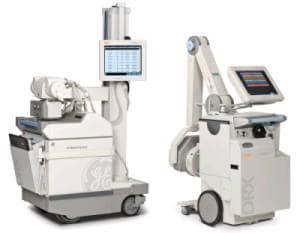 As opposed to purchasing just one highly specialized unit, Larry Kirschner, BSRT, radiology director at Heartland Regional Medical Center in St Joseph, Mo, reports that his hospital purchased five of Carestream Health’s DRX-Mobile Retrofit Kits, which are an addendum to its successful DRX-1 detector. “We purchased two in the main department, two for emergency, and one for orthopedics,” Kirschner said.

“Trauma surgeons in emergency can see clear images within 5 seconds,” said Kirschner. “This allows them to spend more time with patients and helps with their satisfaction.” The rapid response on chest exams, for example, is imperative in the ER. According to Kirschner, there is improved productivity all around.

The same is true in orthopedics, explained Kirschner. Times for physical procedures are reduced by 30 to 45 minutes. The DRX-1 technology, unlike CR-based mobile systems, does not require technologists to travel to a centralized CR reader for image processing, which creates a cumbersome workflow that delays image access. It also improves patient positioning and comfort by eliminating cables and tethers typically required by most DR-based systems, since this mobile unit is wireless.

“We also use this portable bedside unit to look at PICC lines so there is no worry about getting the fluid into the right area,” Kirschner said. “Also, you don’t have to sterilize a field, much less get hung up in cords. Carestream is the only one that does this at this time.”

What also pleases Kirschner is that the cassette-size detector’s wireless capabilities allow medical images to be forwarded to multiple network destinations, so clinicians can make a rapid diagnosis and begin immediate treatment. Kirschner adds that because of DRX-1’s fast 5-second imaging, the amount of radiation conveyed has been reduced by 50%. 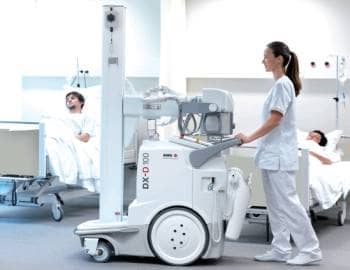 “Another thing that makes this unit so efficient, in our wireless hospital, is that you can see all the orders at once,” Kirschner said. “Before, we had to have one cassette for each exam, so with 15 exams, you had 15 cassettes going back and forth. Now all the information related to the image is integrated with the image. There’s much less chance of attaching the wrong information to the image. In fact, we have reduced our errors by nearly 50%. There are fewer exam repeats. Another factor is if the image is a little lighter or darker than ideal, it can be manipulated to get a perfect image. We weren’t able to do that before.”

The Carestream DRX-1 technology, which replaced their previous CR units, was purchased on June 10, 2010, and was up and running about July 1.

When asked about downsides, Kirschner replied, “There are no downsides. There’s an improved cooperation between physicians and technicians. Physicians are constantly complimenting, and radiologists show their appreciation too. All of this contributes to the bottom line. The DRX-1 is high quality, very reliable, and it was the best priced of all the products I looked at.”

Ultrasound at the Ready 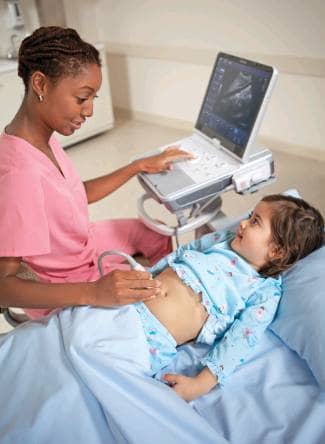 “Doctors and surgeons who treat a lot of people often need to have imaging of arteries and veins in various parts of the body, legs, arms, and even eyes,” Jacobowitz said. “They have to be able to work quickly and optimally with a minimum amount of labor to run the machines. Zonare technology allows us to do that.”

Jacobowitz recalls they got their first ultrasound machines about 5 years ago from Zonare. “At the time, our existing machines were at the ends of their functional life spans, and we were looking for help in different ways,” he said. “The older machines were large and heavy and generated a lot of heat that required ventilation. You couldn’t move them from exam room to exam room, and they required very extensive service contracts.”

The Zonare product, on the other hand, “does not emit much heat, and takes up a much smaller footprint. The way the unit is structured is that the software base is the key. If there’s a problem with the machine, Zonare can literally take charge of the machine over the Web from a remote site. They can make corrections in the software, without having to send a technician. A lot of electronic medical images you have to print out, then put in a folder and stick in a file. These you can save in data storage. Zonare is compatible with other software, so you can easily retrieve those images.”

Jacobowitz adds that the ultrasound images provide not simply static snapshots, but rather moving images, such as blood flow, which can help physicians make their diagnoses. The Zonare does not come burdened with an expensive service contract, since malfunctions can be corrected remotely, but also, Jacobowitz said, “We get mostly free upgrades. Zonare has made good on that promise.”

Jacobowitz is especially impressed by Zonare’s fundamentally new approach to echo data acquisition and image formation. Conventional ultrasound systems, both cart-based and compact, acquire and process echo data line-by-line and therefore are limited by the time required for sound propagation in the patient’s body.

The Zonare product, however, acquires larger quantities of data very quickly in relatively small numbers of large zones, each of which contains a volume of data equivalent to many lines in a conventional system. Therefore, this product acquires significantly more echo data in 1/10 of the time it takes conventional ultrasound systems. As a result, the throughput is substantially faster and there is more time for a variety of advanced processing options while still delivering extremely high image quality.

The Zonare technology fully leverages processor power today and is built to exploit future processor power advances. According to Moore’s law, processing power will continue to double approximately every 18 months for the foreseeable future, offering the promise of substantially improved speed and capability. Since conventional systems are implemented primarily through hardware, they do not significantly benefit from increased processing power.

When asked whether the Zonare ultrasound has any drawbacks, Jacobowitz replied, “There are no drawbacks. This ultrasound unit has proved to be much less expensive than CT scans or MR, with more efficiency and ease of process, as well as being safer. We plan to purchase two more Zonare ultrasounds.”

Louis Hale is a contributing writer for Axis Imaging News.

Imaging at the Heart of Care 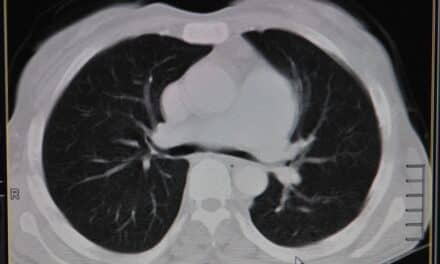 Design for the New Radiology