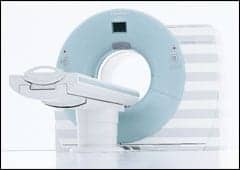 Siemens Takes CT to Next Level

The added applications are set to enhance the offerings of the company’s SOMATOM Definition, a unit with a dual

x-ray tube and a dual-detector design that captures high-quality images at half the dose of previous Siemens systems.

“The SOMATOM Definition moves CT to an entirely new dimension of diagnostic sensitivity where contrast in the image is not merely limited to x-ray attenuation differences, but may include elements of functional and tissue characterization,” said Peter Kingma, vice president, CT, Siemens Medical Solutions USA Inc.

According to Siemens, the SOMATOM Definition provides images at twice the temporal resolution, speed, and power of single-source systems. Even for hearts that beat at a high rate or irregularly, the two x-ray tubes effectively are able to operate simultaneously at different voltage levels in a single scan. As a result, this can yield two data records with different patient information, allowing for the display of tissue and fluids and the distinction of vessels, bones, and soft tissue.

“The Definition already offers enhanced resolution, speed, and power,” Kingma said. “Now, we are adding convenience of use to the mix.”

For example, the syngo DE Heart PBV (perfusion blood volume) brings about color-marking of nonperfused parts of the myocardium during cardiology examinations—such as the isolated display of the heart without thorax structures. After an infarction, the heart perfusion is examined to determine damaged areas of the organ. DECT, for the first time, is able to detect a stenosis and its degree, in addition to the location and extent of the resulting reduced perfusion in the myocardium in a single scan.

Through syngo DE Gout, CT can be utilized for gout detection, which can then examine the damage of cartilaginous and osseous substance from deposits of uric acid crystals in the patient’s joints. The dual-energy application helps physicians to monitor changes in the crystals during the course of treatment.

Enabling the detection of nonperfused blood vessels, this time in the lungs, the syngo DE Lung Vessels offers a range of applications to assist physicians in CT examinations of patients with suspected pulmonary embolism. The “lung isolation” application, for example, isolates the entire organ to make way for assessment for the perfusion situation without obstructing neighboring organs.

As the last of the four new applications, the Syngo DE Brain Hemorrhage is used in the event of cerebral Hemorrhage to help distinguish new and old hemorrhages. The two energy levels of the x-ray tubes are employed to fade out the contrast medium, a process that in the past mandated two scans. Now, with the contrast medium subtraction, there are a couple of advantages, Siemens points out. First, a noncontrast-medium-enhanced examination is not necessary; second, the patient is spared the dose that comes with a second scan.

As physicians are increasingly relying on whole-body 16-MDCT as a diagnostic tool in hospital trauma centers, a team of researchers at the University of Maryland School of Medicine has found the technology can be relied on to spot blunt cerebrovascular injury (BCVI).

The study’s authors say that using a whole-body scan as a first-line means to diagnose BCVI, which can lead to stroke, could result in faster treatment for patients, because until now many physicians have relied on neck MDCT angiography (MDCTA) to diagnose it.

“Just the fact that you’re going right to CT and doing a whole-body scan does save time,” said Stuart Mirvis, MD, one of the authors of the study. “You get all the information in one shot so you can make a decision globally.”

The study was published in the March issue of the American Journal of Roentgenology.

The research team studied 108 blunt trauma patients over a 23-month period, according to the study. The team compared results of 77 whole-body MDCT exams and 48 neck MDCTA exams, relying on angiography reports to determine how accurate each protocol was for diagnosing BCVI.

The authors say their study shows it is not necessary to confirm the results of a whole-body MDCT using 16 detectors with another scan just looking at the neck. “If there’s a question on the 16 (MDCT) that you can’t resolve, maybe doing a dedicated (scan) might help you in an individual case, but as a whole, looking at a general population it doesn’t matter,” Mirvis said.

BCVI was once thought to be a rare injury, but physicians have increasingly found it in trauma patients who were involved in car accidents and suffered twisting of the neck, causing arteries to be stretched or sheared, said Mirvis, who is director of emergency radiology at the University of Maryland Medical Center.

“We began to see that there were patients who harbored these injuries and you had no indication of it,” Mirvis said. “What’s happened in the last couple of years is more and more trauma centers, and just centers that see a lot of trauma, have started doing a lot more full-body surveys on these patients.”

Doing a CT scan of individual segments of a trauma patient’s body can expose the patient to unnecessary radiation, because the fields overlap, Mirvis said. But extending a whole-body MDCT to look at a patient’s neck results in only a small increase in radiation exposure, he said. “It wasn’t as practical until we got the 16 detectors, and with 16 and above the accuracy seems to be high enough to do pretty good, accurate work,” Mirvis said.

By the end of the year, Nassir Marrouche, MD, of the University of Utah School of Medicine plans to perform his first cardiac ablation procedure with simultaneous MRI imaging. It would be a milestone in his effort to help patients with atrial fibrillation (AF), a rhythm disorder that affects the heart’s two small upper-chambers and increases a patient’s chance of suffering a stroke.

“It’s a very fine line,” said Marrouche, director of the Atrial Fibrillation Program at the University of Utah School of Medicine. “That’s why the MRI is a need ? for what we deal with; it’s not an alternative, it’s a need.”

Marrouche presented his latest research on new methods of using MRI to facilitate AF treatment at the American College of Cardiology’s annual meeting in Chicago, which took place March 29 to April 1.

MRI is a better imaging technique for treating AF than fluoroscopy and CAT scans, because it allows for better soft tissue contrast, according to Marrouche. The use of MRI in treating AF starts with an examination to see if a patient is even a good candidate for ablation, Marrouche said.

With special software, it is possible for an MRI machine to reveal how much of the heart has been damaged by AF. This is because the damaged, fibrotic tissue has fewer hydrogen atoms, and the MRI machine can reveal that in an image.

In the next stage of treatment, MRI is also a crucial element in an ablation procedure, because it allows physicians to see the lesions that form on a patient’s heart tissue and determine if the ablation is deep enough, Marrouche said.

Without MRI, doctors often must perform ablation on a patient a second time because the lesions were not deep enough to destroy all the fibrotic heart tissue, he said.

The opposite risk is for physicians to ablate on a patient for too long, burning too far into the atrial wall and connecting the atrium to the esophagus, a rare but potentially fatal complication that was only discovered a few years ago.

“This is a horrible complication that shocked everyone,” Marrouche said. MRI can aid in preventing that complication by helping physicians see when they must stop ablating, he said.

Ninety percent of the patients Marrouche has performed that procedure on were cured of AF and off heart medications within 3 months, according to the University of Utah.

Marrouche has also relied on MRI after ablation as a follow-up imaging tool.

The next step is to use MRI in real-time during an ablation procedure, Marrouche said.

So far, he has only experimented on that process in animals, but he hopes to perform ablation on a human patient under an MRI magnet before the end of the year. “A lot of people are asking about it, they want to integrate it, so everybody’s thinking about having a magnet in the lab now,” Marrouche said.

MDCT: How Many Rows Is Enough?

Should Your Hospital Establish a Stroke Center?