The Evolution and Revolution of PACS 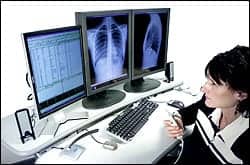 Ten years ago, only the most well-endowed hospitals had a PACS. Today, it is affordable and required equipment for radiology practices, large and small. But PACS is still evolving from its tele-radiography days. As RIS software becomes more integrated into products, PACS is starting its latest phase, evolving into another animal altogether.

Just 10 years ago, radiology was a completely different business. There were high profit margins for CT, MR, and other modalities, and the handling of images and patient information revolved around paper, film, and some billing and scheduling software. Then came PACS.

At first, a “picture archiving and communications system” was a multimillion-dollar luxury for well-funded early adopters—like the US military. Today, with DRA, a radiologist shortage, and future reimbursement cuts, if an imaging center does not have a PACS, it is operating 10 years in the past. And if its PACS can only view and archive digital images, it is time for a new PACS.

The fact is that PACS has been—and continues to be—a revolutionary innovation for radiology. Today, it is a medical diagnostic tool as well as an essential information and business management tool. The features of PACS today are so comprehensive that the literal acronym of “PACS” has become a poor description of its capabilities. With the technology entering its next generation, it is perhaps time to give “PACS” a new name entirely.

It is difficult to trace the genesis of PACS. Simple teleradiography has existed at least since 1929 when, in a precursor to the fax machine, the dots and dashes of a Western Union telegraph transmitted the image of a dental radiograph across the country.

Other makeshift teleradiography systems were developed in the 1970s. Wendell Gibby, MD, CEO of Novarad Corp, American Fort, Utah, and a practicing radiologist, recalled a time in the 1970s when x-rays were occasionally transmitted by way of “cameras-on-a-stick.”

“These systems were closed architecture and hardware that had a little video camera on a stand. You’d take a picture of the x-ray and send it across the telephone line,” said Gibby. “Teleradiography in those days was more of a convenience item so that doctors wouldn’t have to come in at night. Images were very poor quality, but it was enough to screen a study or CT, say that it was negative or not, and go back to sleep.”

There were more sophisticated PACS precursors in the 1970s and ’80s at universities, hospitals, and research facilities around the world. It would be impossible to point to one father or mother of PACS; there were many ideas and contributions that led to the system that we know today. And aside from dedicated researchers, physicians, and scientists, the implementation of PACS can be attributed to several industry-wide technological advancements that occurred during the 1990s.

The ’90s: An Era of Innovation

By the 1990s, computer hardware and software had advanced enough so that PACS could go from a research and development product to commercial applications in radiology.

Joe Maune, business manager for Healthcare Information Solutions at Carestream Health Inc, Rochester, NY, explained how PACS was, at first, a replacement for film. “Film represented many things: It was a capture device, the storage device, the display device, and the communication device. How we communicated with referring physicians was all based on this piece of film,” said Maune.

Maune goes on to say how early PACS systems enabled radiologists to break down what was once encapsulated into film and distribute it into different components: a capture component with CT and MR and computed radiography; a transportation component with networks; a storage component with archives; and a display component with diagnostic workstations. Finally, PACS was a way to communicate with referring physicians by either printing digital images on film or transmitting the images to a compatible workstation.

While this new type of digital communication was a significant advancement, the systems had many challenges for small hospitals and imaging centers. Not only were PACS systems expensive, but also they were almost completely patent protected. Consequently, software, monitors, workstations, and storage devices could be serviced and supplied only by the original manufacturer.

In addition, technology was rudimentary by today’s standards. “Remember that modems were 14 kbs,” Gibby said, recalling when Novarad first started. “The Internet didn’t exist as we know it. Databases were crude and clumsy and weren’t widely available technology for small PCs, and the graphics display cards in the monitors were not capable of handling the kinds of image resolutions.”

By the late 1990s, several breakthroughs allowed PACS to be accepted by a larger audience. First, most manufacturers had accepted DICOM as its communication standard, allowing different brands of imaging modalities to transmit digital data. Second, by utilizing the new DICOM standard, software companies could begin designing systems that could be used with off-the-shelf personal computers. At the same time, personal computer technology was on a technology spurt due to graphic-heavy video games and the exponential growth of the Internet. Consequently, computer chips, memory and video cards, and telecommunications became faster and less expensive for all applications, including PACS systems.

From Tool to Necessity

By 2000, the technology, economics, and the Internet were ready for PACS, but it was up to the PACS companies to convince institutions and radiologists that PACS—and upgrading to computed radiography—were worth the investment.

To understand how far PACS has brought the radiology business into an entirely new era, one needs only to remember how most radiology centers used to operate 10 or so years ago:

Timothy L. Gould, RT R MR, is the PACS administrator for Texas-based Radiology Associates of San Antonio, PA (RASA) and Advanced Medical Imaging Centers. Gould recalled what it was like in early 2000 when he introduced one of the first generations of Milwaukee-based Merge Technologies’ PACS to some physicians, who were still used to paper. In fact, some did not even own a home computer.

“They had never even touched a mouse. So, now, having to use a PACS, it was taking some of them 10 minutes to do what used to take literally 2 seconds, like time stamp an order sheet and put it in a file,” said Gould.

Despite initial growing pains, Gould’s physicians adapted well to PACS. Now, using the next generation of Merge’s Fusion PACS, Gould notes that his physicians have dramatically increased their professional efficiency.

Today’s evolution of PACS is neither a luxury nor simply a well-organized way to view and archive digital radiographic images. PACS is an essential diagnostic and workflow tool inside the reading room—wherever that room is in the world—and an enterprise business solution for the entire operation. It is part RIS, part billing solution, part workflow manager, and part medical informatics.

Since PACS’s introduction about 10 years ago, film is no longer the predominant mode of communication between the radiologist, technician, patient, physician, and office personnel. In fact, in the integrated RIS/PACS systems offered by many manufacturers, film and paper no longer exist. As a result, it is possible for the modern radiology workflow to look something like this:

These are but a few of the diagnostic and workflow features available to radiologists with a modern PACS. Also, unlike the first generation of PACS, buyers may pick and choose what features they want, molding costs to the needs of the facility.

Much of PACS’s new potential to improve the business of radiology has to do with the trend in merging RIS and PACS systems. Consequently, where it was once common to buy a stand-alone RIS software package and somehow configure it to work with the new or old PACS, the new trend is to buy a so-called RIS/PACS that truly integrates both systems.

As part of this RIS/PACS integration, developers are including workflow management and practice analysis capabilities. These powerful new features can take raw operations data and provide significant business informatics for imaging operators, such as procedure cost analysis.

“Most institutions have no clue about what a procedure costs or what it returns for them,” Gibby said. “Now with the integration with the RIS system and the additional tools that we’ve incorporated, I can tell you down to the penny what a procedure costs and what each insurance company pays. I can tell you what our profit margins on procedures are, and as a result, when I go into negotiations with an insurance company, I’m armed with some information that helps me be a more effective negotiator.”

In addition, workflow management and practice analysis can inform the outpatient imaging operator which physicians are ordering what procedures, how often, and whether they are continuing to refer or have dropped off. Programs can also analyze the operation’s efficiency by clocking patients from the time they sign in and throughout the entire visit until they leave. Furthermore, an off-site radiologist on duty can instantly know if and when an exam has been performed, read, reported, and by whom.

Moving Forward: From PACS to “REMS”

From the early days of cameras-on-a-stick to now, PACS has evolved to become an integral part of radiology. Yet the revolution is not complete.

Despite DICOM, Health Level 7 (HL7), and the Integrating the Healthcare Enterprise (IHE) initiative standards, PACS/RIS systems are still not entirely compatible with other HIS or PACS/RIS systems. The next generation of PACS should address more seamless interoperability between different health care systems, which will inevitably improve the overall workflow of health care and treating patients more quickly.

Along with the technological evolution, Gould believes that the name “PACS” and even “RIS/PACS” are no longer accurate descriptions of their true functionality. “It has too broad a spectrum of meaning now,” said Gould. “We need to get clearer on what these systems are really becoming, because they have far, far exceeded the term ‘PACS.’ ”

Asked for his idea for a replacement term, Gould said, “Let’s call these things what they truly are: They are really ‘Radiology Enterprise Management Systems.’ So, let’s change the term to REMS.” The evolution continues.

Tor Valenza is a staff writer for Medical Imaging. For more information, contact .

The Purview of the PACS Administrator