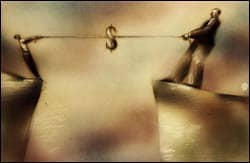 Some experts say an oligopoly exists among OEMs in the medical imaging field. How are today’s big players affecting providers, purchase decisions, and patient care?

In the world of medical imaging, there are a few powerhouse equipment manufacturers who clearly dominate the industry. Their names are familiar ones: Philips, Siemens, GE, Kodak. Smaller manufacturers also play a role in the industry, though less from the equipment side and more from the software side—they supplement what the big players produce, and the major manufacturers depend on them just as much as the end-of-line service providers do: to enhance and upgrade the end product so strongly associated in the mind of the service provider, and the patient, with the brand-name hardware. But as market conditions shift, and they are seismically shifting primarily due to the Deficit Reduction Act (DRA) and associated caps on reimbursements, there are bound to be rivalries among and between the different tiers of market players as competition takes on new meaning.

One associated question implicit in this is whether or not the big players, the original equipment manufacturers, or OEMs, will form an oligopoly among themselves as a defensive measure designed to ensure they can at least stabilize their profit margins. The dictionary defines oligopoly as “[A] market condition in which sellers are so few that the actions of any one of them will materially affect price and have a measurable impact on competitors.” An oligopoly can be perfect—where all firms produce an identical good or service (cement)—or imperfect—where each firm’s product has a different identity but is essentially similar to the others (cigarettes). Because each firm in an oligopoly knows its share of the total market for the product or service it produces, and because any change in price or change in market share by one firm is reflected in the sales of the others, there tends to be a high degree of interdependence among firms; each firm must make its price and output decisions with regard to the responses of the other firms in the oligopoly, so that oligopoly prices, once established, are rigid. This encourages nonprice competition, through advertising, packaging, and service—a generally nonproductive form of resource allocation.

One widely recognized example is the retail gas market because a small number of firms control a large majority of the market. Another example is the automobile industry in the United States, in which six companies—GM, Ford, Chrysler, Toyota, Honda, and Nissan—control 90% of the market. Other industries that are defined as oligopolies include airlines and tobacco companies.

But does this describe the situation currently existing in the medical imaging manufacturing industry? Does it describe the direction in which the industry is heading?

One industry expert with long-standing ties to multiple manufacturers who asked not to be identified argues that the OEM landscape should definitely be characterized as an oligopoly, particularly on the large capital equipment side. When it comes to peripherals, such as x-rays, RIS, and ultrasound equipment, he would argue—contrarily—that the marketplace is not oligopolistic. He adds that from the purchaser’s point of view, the fact that the industry is dominated by basically five manufacturers is not necessarily negative. From the equipment perspective, there is still a good selection of various functionalities, mainly in terms of the bells and whistles that customize equipment. The vendors have many systems in their offerings, and from a choice perspective there remains a good selection.

That’s from the product side of the effects of oligopoly in the marketplace. From the price point of view, however, this expert claims that right now is a very interesting and challenging time for the whole industry. Historically, in the United States, providers have paid significantly more for technology and equipment than in other markets. However, with limits being put on reimbursements, service providers are putting limits on the prices they are willing to pay for capital equipment. This has led to significant cost pressures, which are much higher now that they’ve ever been, while at the same time prices are coming down dramatically.

Will it affect innovation? This industry expert believes that the effect of downward cost pressures may constrict demand from the consumer/patient side. However, in the long term, any manufacturer that does not innovate will be left on the wayside of the market.

Manufacturers will have to manage to innovate in a more cost-effective environment, and that’s where the focus will develop if they are to stay competitive and drive their own growth platforms. It will be years before supply and demand are in sync, especially since in some markets there has been considerable saturation of imaging technology because reimbursements have been so high. This industry expert figures it will be at least 2 or more years before manufacturers will get costs in line with new market realities.

Where this industry expert believes the impact will really be felt is in terms of impact on patient care, especially in terms of patient access to care. Access, he believes, will be seriously reduced. “There won’t be imaging centers on every corner, and in as short a time frame as 6 months to 1 year, there won’t even be as many centers as there are now. Financiers are worried about delinquencies due to reimbursement changing and want to see business plans that are spruced up.” Packaging between large players and middle-sized players will not have a major impact, and the consolidation that would logically follow from a market tightening has already taken place. But there will be greater emphasis on vertical integration from the vendors’ side with companies like Philips buying components suppliers up and down the food chain. Any related impact from that will be largely invisible to consumers.

A slightly different take on where the market is headed, and whether or not it is or will become an oligopoly, is provided by Alicia Vasquez, chief administrator of Arcadia Radiology Medical Group in Arcadia, Calif. Asked whether she believes the imaging industry is characterized by oligopoly, she said yes. “My take is that when it comes to the high-end technology side of the market—the MRIs and CT scans—then yes, there are dominant players, and they are the big guys. When it comes to the lower-tiered imaging market—x-rays and such—then no. There are lots of players with lots of good equipment. They’re not the big guys.”

Vasquez’s group spent $1 million last year, and so she said they haven’t felt any pressure so far from changing market conditions. And as her group shopped around, the OEMs were all very helpful and clearly desirous of developing a full model relationship. “We were concerned with the DRA and the change in reimbursements as we looked for equipment, but we also wanted to find a multifaceted solution to our needs. We finally narrowed it down to two OEMs, and we went with GE. We found that they can service multiple kinds of equipment with price breaks that you can’t get going alone.”

The package included the equipment, an extended warranty period, education regarding use of the equipment as well as “other products.” “The ?other products’ were products we needed and that the big players can provide because of their relationship with middle-sized players,” Vasquez said. “They’re things that complement the technology but which the large players don’t manufacture.”

Vasquez said she is aware of shifts taking place in the market, even though they haven’t affected her facility yet. “I know of peers who are not buying equipment right now or have cancelled orders. I’m also aware of new imaging centers that have been cancelled or put on hold as well. In fact, a colleague of mine who provides consulting services for imaging-center development told me on average he’s involved in the development of 17 new imaging centers around the country, but right now he’s only got four.”

Chris Wright is the vice president of Indirect Channels in the United States and Canada for Carestream, in affiliation with Kodak, and he also believes the medical imaging market operates as an oligopoly, but with a condition. “The oligopoly exists within segments,” he said. “We cooperate in one segment, and we compete in others.” Where Carestream cooperates is in the area of computing radiology. “We cooperate and sell products to Philips, Siemens, and GE. We do not manufacture computing radiology equipment, but the Kodak nameplate appears on the product because our reputation is so high. We expect to continue to cooperate in this area, but that technology is supplanted by full digital radiology.”

And that’s where the competition comes in for Carestream. “There’s a price barrier in digital radiology,” Wright said. “Very few full digital systems go for under $700,000 or $800,000. And there we compete as vigorously as GE, Siemens, or Phillips.”

Wright said the competitive field is as vibrant as ever. He adds that smaller manufacturers are thriving because they are focusing on their value space and the big players don’t play there. “It’s hard to justify putting end-to-end solutions in a five-member clinic. We, as a big manufacturer, don’t play there.” As an example, he mentions GE’s purchase of Dynamic Imaging. “The reason they bought that is because GE needs to get into that value space, health care information, in order to unlock that market for themselves,” Wright said. “They also had to purchase a market player with credibility and a customer base. Because, especially with the way the market is shaping up now, GE still needs to be able to sell small MRIs.”

Richard Townley is president and CEO of AGI Healthcare Group, based in San Ramon, Calif. AGI provides imaging services providers with management consulting services aimed at lowering costs, improving productivity, and enhancing profits. As a result, AGI oversees the development of products and new ventures in the medical imaging field. “We buy equipment for existing centers, hospitals, and we oversee the financing for those facilities as well,” Townley said.

Townley said there is a definite downturn in equipment purchases due to the DRA. Over the last 5 years there’s also been a lot of consolidation among tiers and sectors in which single-modality providers were being acquired by the big players, such as Siemens, GE, and Philips, which has expanded its channels of distribution. “It’s natural for the customer if they’re happy with the OEMs to want to receive a greater product line from them as well,” Townley said. “It’s also much easier than developing the same product and competing with them.”

While the DRA’s impact on reimbursements has already resulted in defaults on equipment financing, Townley said what he’s also seeing in response to the DRA is a lot of restructuring. “Where hospitals see opportunities to acquire centers, radiologists may be willing to sell due to their uncertainty regarding reimbursements in the future.” He adds that if reimbursements continue to fall and margins become thinner, people won’t be able to upgrade and equipment will get older. “Clearly, lower reimbursement levels will result in fewer centers being developed, centers won’t upgrade equipment or software, and there will be cutbacks in hours, so patient wait times will be longer.”

Will it impact innovation? “That’s up to the OEMs,” Townley said. “If you believe the market will shrink, you’ll be more inclined to hunker down.”

Nikos Valance is a contributing writer for Medical Imaging. For more information, contact .

It Is Simple Arithmetic