Interventional radiology (IR) for gynecologic diseases encompasses a wide variety of radiologic procedures that provide nonoperative therapeutic benefits to women. On the one hand, some of these procedures are specific to the gynecologic diseases, while others are applicable not only to women, but to men, children, and adolescents as well. IR for gynecologic disease might be viewed as a horizontal grouping of various IR procedures, rather than typical vertical orientation by organ system (eg, chest, gastrointestinal, vascular), or by modality (eg, ultrasound-, CT-guided).

Abscesses. Specific gynecologic abscesses such as tubo-ovarian (TOA) and pyometrium have many controversial aspects. When and how to treat these abscesses are issues, as gynecologists often administer antibiotics for protracted periods as the main therapy. Conversely, radiologic catheter drainage may be instituted at any time, and with concomitant antibiotics often results in dramatic and rapid cure.

Pelvic abscesses include periappendiceal, peridiverticular, Crohn’s, and postoperative. The issue of approach into the abscess is essential for radiologic drainage. The options include anterior transabdominal, posterior transgluteal, transvaginal, transrectal, transcervical, and transenteric. Choice of access route depends on location of the individual abscess, juxtaposed structures, equipment availability, and operator training and preference.

Ovarian Cysts. Ovarian cysts may be needle-aspirated for diagnosis if the cause of the fluid collection is uncertain. Furthermore, ovarian cysts may be aspirated and treated by sclerotherapy (with alcohol or doxycycline) for symptomatic relief, especially with malignant cystic tumors. Diagnosis of ovarian cysts depends on progesterone and estradiol levels. CA 19-9 is another marker that is extracted from cystic fluid or blood and may be elevated with malignancy.

Percutaneous Gastrostomy/Gastroenterostomy (PG/PGE). The problems of nutritional support and chronic small bowel obstruction are particularly troublesome in women with fewer or no therapeutic options for their incurable pelvic malignancies (carcinoma of the cervix, uterus, or ovary). Loss of appetite and poor nutrition can be overcome by percutaneous radiologic gastrostomy or gastroenterostomy. The transcutaneous nonendoscopic approach is less expensive and has fewer complications than total parenteral nutrition or surgical gastrostomy.

Small bowel obstruction may be treated either by percutaneous gastroenterostomy with the tube positioned proximal to the obstruction or by direct jejunostomy alone. Although various methods are effective, fluoroscopic guidance with use of T-tacks is a typical approach. A much-appreciated benefit by the patient of these percutaneous techniques is elimination of a nasogastric tube for decompression or feeding that might otherwise be necessary for the duration of the patient’s life.

The prototype stone disease entity of Oriental cholangiohepatitis is significantly more common in women than men who are of Oriental extraction. In this disease, bilirubinate pigment stones fill much of the extra-and intra-hepatic bile ducts, with accompanying strictures. Radiologic input is valuable for imaging diagnosis of the disease, as well as percutaneous maneuvers to extract stones, dilate strictures, access occluded ducts, and dilate obstructed surgical bilo-enteric anastomoses.

PBD with metal stenting frequently is used to palliate gynecologic malignancies. Tumors of the endometrium that are metastatic to the porta hepatis or metastatic breast carcinoma to the liver cause high biliary obstruction more amenable to PBD than to surgical or endoscopic approaches.

In renal obstruction during pregnancy, a percutaneous catheter along with antibiotics (if there is infection) can manage the problem until delivery of the baby (Figure 1). Causes of obstruction are the enlarged uterus itself, or a stone that usually is lodged in the uterovesical junction. This procedure is done under ultrasound guidance alone, so that no exposure to radiation need occur. Definitive therapy for the stone is delayed until the postpartum period when radiation is less of an issue.

Nerve Blocks. In most sites in the body, image-guided nerve blocks are similar to those utilized in men. However, hypogastric nerve blocks may be particularly valuable in women who have chronic, resistant pelvic pain. The pain may be due to malignancy, endometriosis, or postoperative or idiopathic conditions. The technique utilizes CT to guide needle placement, followed by injection of alcohol to ablate the hypogastric nerves.

Percutaneous Biopsy and Tumor Ablation. Percutaneous biopsy for diagnosis is one of the more common procedures performed in IR. A new and evolving procedure for malignancy is percutaneous tumor ablation that can be accomplished by heating, freezing, or direct chemical injection. This technique has evolving applicability for liver, renal, chest, osseous, and gynecologic tumors. 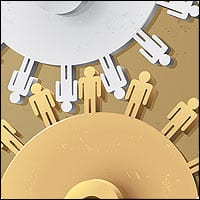 The Keys to Change