Cochlear implantation is a well-established means to treat severe hearing loss. The device consists of an external part that sits behind the ear and a second part surgically implanted under the skin that stimulates nerves in the cochlea, a fluid-filled, spiral structure in the inner ear that transmits sound across sensory nerves to the brain. Cochlear implants don’t restore normal hearing, but they can help a person recognize words and better understand speech.

While complications from cochlear implants are rare, post-mortem studies have linked them with inflammation, fibrosis, and new bone formation. The potential clinical implications of new bone formation make it desirable to visualize and possibly prevent development, but in vivo—or within the body—detection has not yet been described.

“Such subtle changes are challenging to visualize in vivo, in particular in the vicinity of a metallic implant causing artifacts on CT images,” says study co-lead author Floris Heutink, MD, MSc, from the Department of Otorhinolaryngology at Radboud University Medical Center (Radboudumc) in Nijmegen, the Netherlands. “However, through the new availability of an ultra-high-resolution CT scanner, we were encouraged to investigate this.”

“As indicated by our study, there is a correlation between new bone formation and long-term residual hearing loss,” says study co-author Berit M. Verbist, MD, PhD, from the departments of radiology at Radboudumc and Leiden University Medical Center in Leiden, the Netherlands.

New bone formation around the cochlear implant electrode has a number of negative consequences due to its effects on the device and the structures surrounding it. It can affect the spread of electrical current within the cochlea, leading to complex device fitting, channel interaction and poorer overall hearing outcome. It could also complicate future therapies such as gene therapy to restore cochlear function.

The researchers note that improvements in design and surgical techniques have made cochlear implantation available for an increasing number of people with severe to profound hearing loss. This increase in patients makes a method for detecting and monitoring new bone formation in vivo more urgent than ever.

Still, many remaining questions must be answered, Heutink says, before the detection of new bone formation in an individual patient would have therapeutic consequences. “This technique will be a valuable tool to gain insight into occurrence, time course, and the pathophysiology of this process and maybe used to evaluate still-to-be-developed treatments against new bone formation,” he says.

Featured image: Methods for CT assessment. (A) An oblique multiplanar reconstruction through the basal turn of the cochlea was obtained and (B) midmodiolar sections were obtained with radial multiplanar reconstruction through the center of the cochlea (white lines in A). On such midmodiolar images, the presence or absence of new bone formation and the scalar position were assessed at each electrode contact. Angular insertion depth was measured from the lateral border of the horizontal semicircular canal (blue line in A), using a correction factor to the center of the round window (yellow line in A) of 34°. 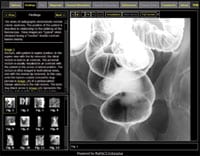