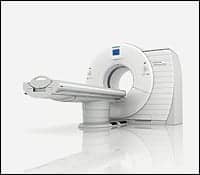 CT scans for children are notoriously dicey propositions, but a new machine from Siemens could make things a lot easier. According to the company, the SOMATOM? Definition Flash dual-source CT scanner, with the fastest scan speed on the market—and consequently the lowest radiation dose—is ideal for infants and toddlers who simply can’t sit still.

Recently installed at the Arnold Palmer Hospital for Children, Orlando, Fla, the SOMATOM requires only a fraction of the typical radiation dose, even for the tiniest anatomical details. The key to all that speed, said Murat Gungor, senior director of marketing and operations for Siemens CT in the United States, is two different x-ray tubes and two different measurement systems.

Information is acquired by the so-called “dual source” in a complementary fashion, allowing for high-speed data acquisition. “Normally in CT, when you are scanning a patient at a rapid table speed, you lose image quality because you are not collecting enough data,” said Gungor. “The Flash generates an excellent image, and is almost 10 times faster than conventional CT. Scan time decreases dramatically, and that provides a dose reduction of approximately 90% less radiation than conventional CT.”

Administrators at the Arnold Palmer Hospital chose the Siemens unit specifically as part of their radiation dose reduction strategies. “We are extremely pleased to be the first dedicated pediatric hospital in the world to provide this new technology,” added John Bozard, president, Arnold Palmer Hospital for Children. “For our young patients, the SOMATOM Definition Flash scanner means faster images and reduced radiation exposure, and significantly lessens the need for contrast dye injections.”

The machine’s X-CARE application selectively reduces radiation exposure to dose-sensitive anatomical regions, such as thyroid, gonads, and breast region, by as much as 40%. An adaptive dose shield blocks irrelevant radiation during spiral scanning, ensuring only a clinically essential radiation exposure. Siemens officials report that this feature leads to an additional 25% reduction of the dose required for routine examinations.

Since children and babies are at great risk from radiation exposure, hospitals around the country have attempted to abide by the ALARA (as low as reasonably achievable) principle. Adults appreciate the quick scan, and parents and clinicians no longer face the prospect of sedating pediatric patients. Even holding one’s breath is optional with the flash technology.

The luxury of speed ultimately fosters new possibilities for performing CT examinations of the adult heart in the sub-millisievert (mSv) range. Specifically, the heart can be examined at a radiation exposure level that is three times lower than the background radiation a person naturally absorbs in a year. The SOMATOM Definition Flash is, in fact, the only CT scanner that enables routine applications of noninvasive cardiological diagnostic techniques at levels routinely below 1 mSv.

“Future generations are going to be exposed to a fraction of the dose while providing the highest level of patient care and comfort that create peace of mind in the community,” said Kulin Hemani, vice president, Computed Tomography, Siemens Healthcare. “The speed of the SOMATOM Definition Flash, the excellent imaging quality from head to toe, combined with the lowest deliverable dose, ensure that pediatric patients receive the best care. This is accomplished irrespective of patient motion and within a fraction of a second.”

Siemens’ engineers boast SOMATOM scanning speeds of up to 45 cm/s, and a true temporal resolution of 75 ms that enables complete scans of the entire chest region in just 0.6 seconds. With those kinds of numbers, clinicians can now choose if they wish to require patients to hold their breath during the exam. “But again, the impact is even larger with the pediatric population, because when you have a 1- to 2-year-old child, you can’t expect that child to cooperate for your CT scan,” said Gungor. “You would have had to sedate that child, which requires major workflow operations. In addition to the considerable clinical benefits, the workflow impact is also large.”

For adults who require medical imaging, the experience can be a daunting one. For children, the fear can be even more magnified.

With its Aquilion ONE CT scanner, Toshiba America Medical Systems has focused on making imaging less scary for younger patients, and as a result, the technology has been gaining ground, especially in the pediatric imaging community.

The company has sold nearly 200 units worldwide, including about 50 in the United States, since the Aquilion ONE made its debut at RSNA in 2007.

“One of the biggest challenges with imaging of children are that often children who require imaging are born with congenital defects,” said Robb Young, senior manager, CT Business Unit. “They start imaging from birth, and they may have to get 18 or 20 scans before the age of 5. If you think about it, imaging becomes part of what they do. That’s why it’s very important to make that imaging device not threatening.”

According to Toshiba, the scanner is ideal for the pediatric market because it reduces radiation and lessens the need for sedation while producing a high-quality diagnostic image. Young patients who need multiple follow-up scans over their lifetimes are particularly at risk of accumulative radiation dose. However, the Aquilion ONE’s rapid acquisition time exposes patients to less radiation and reduces radiation exposure by up to 80%, according to the company.

Rather than using multiple overlapping rotations as in helical CT systems, the scanner has the ability to capture up to 16 cm of anatomy in a single x-ray rotation. Furthermore, it can image a patient in 0.35 seconds, compared to the 4 or 5 seconds that conventional helical CTs take.

Specifically, the scanner’s dynamic volume CT can image an entire organ in a single rotation by acquiring volumetric data sets while allowing doctors to see organ function. According to the company, no other imaging modality has the ability to image both soft tissue and bone in motion. As a result, less patient sedation is required, an important feature in pediatric imaging.

The Aquilion ONE features SUREExposure Pediatric software, which automatically takes inputs on the size and age of each patient and tailors the radiation dose to each individual. Also, the system can collimate the image down to the specific area during an exam if less than 16 cm of coverage is required. This in turn results in even more substantial radiation dose reduction.

The technology also comes with a Pediatric Kit that includes child-friendly accessories, such as child-size table straps, pediatric head-holder, and an infant immobilization device. iStation, an audio-visual instructional tool, aids children in learning how to hold their breath during exams. Children can also play with a smaller replica of the Aquilion ONE in order to understand more about the imaging process and alleviate any potential fear. Additionally, colorful designs and images on the unit exterior help foster a more child-friendly environment.

Young said Toshiba’s Aquilion ONE is also getting more attention from community hospitals, which are looking at the unit to perform a wide range of procedures.

“Sites in smaller cities have seen in this CT the ability to do everything from bread-and-butter imaging that they could do every day, to—when needed—the more advanced tasks, such as handling pediatric, stroke, or cardiac patients,” Young said, mentioning installations in Bismarck, ND, Green Bay, Wis, and Boise, Idaho. “It really gives them that flexibility to deal with their entire patient population so they don’t have to send their patients to another city.”

In related news, Toshiba recently released software that can lower the dose up to 20% for cardiac imaging compared to the company’s previous software release. “It is able to more efficiently look at the information and thus scan at a tighter window,” Young said. Existing customers will receive a free upgrade to the software. 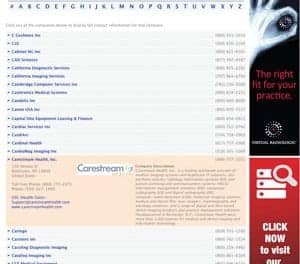 Finding Products and Services is Just a Click Away 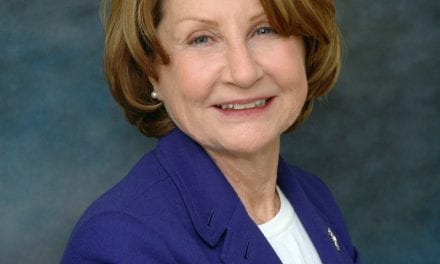