Under the best of circumstances, a picture archiving and communications system (PACS) will not eliminate 100% of film. Film printers will still be needed to get hard-copy images to those physicians who demand them. Patients may need film too, although a much cheaper way to give patients images is on computer disks. CD burners thus become PACS attachments. Digitizers to convert images for PACS compatibility are another example of plug-in devices that must be accounted for when putting in place an imaging system. All these devices have to be planned for and their expense allocated. What is not so easily foreseen is how these devices may impact workflow. They can sometimes create quality control issues too. Factor in Digital Imaging and Communications in Medicine (DICOM) compatibility between modalities, PACS, and the peripherals, and plug and play with add-ons can take a lot of cooperation to get things going.

Dry laser printers and a rapidly vanishing number of wet laser and chemical printers continue to be a part of the image-producing terrain. It would seem logical, therefore, that except for cutting back on their numbers, a PACS install would do little to disrupt the old printing routine. This turns out not to be the case. One reason is that a PACS can impact printing workflow, especially when printing is centralized.

David Quinlan, RT(R), is informatics PACS manager at Beth Israel Deaconess Medical Center, a 525-bed hospital in Boston that completes about 285,000 imaging examinations per year. About 50 radiologists and another 50 radiology residents staff it.

When Deaconess deployed its PACS 4 years ago, Quinlan says, it decided to centralize its reduced-demand printing in its file room. The file room staff would be trained to fill printing orders off the PACS.

“We said we’ll centralize because we won’t need the [radiology] techs to do the printing any longer,” Quinlan says. It turned out to be a strategy with a faulty premise.

“We were taking some of the least-trained people in the department and getting them to do higher level work. It didn’t work out very well. Printing was a particular issue,” Quinlan says.

“Even though we trained the file room staff on certain issues, they just did not get the hang of it. They didn’t have the image-leveling knowledge that a tech would have. As far as zooming images to print, they didn’t know what to look for,” Quinlan adds. “If the idea is that the file room can just pull the image up and press the print button, the quality may suffer.”

To overcome the quality problems, Deaconess had to reshape its printing protocol. “CT and MR were the largest source of the fallibility,” Quinlan says. “We had the RTs do them.”

Gary Fammartino is vice president of ancillary services for SVH. The Indianapolis hospital is the flagship in a 15-hospital chain that is being converted to PACS step by step. All the hospitals and clinics will eventually send and receive images from one massive centralized archive.

“You go through a learning curve with each install,” Fammartino says. SVH kept its radiology technologists operating its printers, but, even so, quality became an issue.

“As the techs move away from having to print the majority of their cases, what we’ve seen is that with the quality of the film being printed out and the layout of the windows, there is a higher error rate. The sequence is not set up right or the header is not added on,” Fammartino says.

With the quality assurance focus turned to the imaging on PACS workstations, the quality of the printed film falls into neglect. “That was one of the things we did not anticipate. It strains your relationship with your doctors if you don’t correct it,” Fammartino adds. “We do random checks now, and any error that is recognized gets right back to the tech that did it. It becomes a performance measurement indicator. You can’t assume that the image you see on the workstation will transfer to a quality hard-copy image, you’ve got to check it out. That is now mandatory.”

On the positive side, Fammartino notes that SVH was able to get rid of several printers because of the lessened demand after PACS. “It was a significant enough reduction that it reduced our servicing cost,” he says.

CDs and the EMR

As institutions have deployed PACS, they have worked to cut back expensive film printing by whatever method. Burning PACS images to CDs as a film alternative is now common. The difference in cost between film and CDs is striking. At Beth Israel Deaconess in Boston, Quinlan says, “It costs us a dollar to burn and mail a CD versus about $20 to do the same thing with film.”

The goal at many big institutions is not just to get images on a CD, it is to get the radiology report and often the whole patient folder, creating a de facto EMR (electronic medical record) on disk for the patient or referring physician.

“We decided with our CDs that the burner would have to be fully integrated with the RIS [radiology information system] for reports as well as the PACS images,” Quinlan says. “We also have the patient demographics burned on the CD. We wanted one automated procedure where the burner would do everything, both for quality control and for patient confidentiality.”

At Robert Wood Johnson University Hospital (RWJUH) in New Brunswick, NJ, Karen Stewart, RT(R), is PACS coordinator. The hospital is licensed for about 510 beds. About 200,000 patients are seen there each year. The hospital is the hub of one of New Jersey’s largest health care systems. RWJUH also integrates images and patient files on its CDs.

“The CD burners are right on the PACS,” says Stewart. “That package pulls the reports off the RIS and burns those with the images. We usually end up burning the entire patient folder. The doctor with the CD is looking at essentially the same thing that is on the PACS.”

Like others, Stewart maintains that CDs are no riskier than film and paper files when it comes to patient confidentiality. “It’s information for one patient and it’s discharged to the patient and signed for by the patient,” she says. Referring physicians must also sign for the CDs, she adds.

CDs are being used for image transfer even when a PACS is not in place. At the TITUS Regional Medical Center, a 165-bed hospital in Mt Pleasant, Tex, the groundwork is being laid for a PACS installation 2 or 3 years in the future. Part of that groundwork is limited use of CDs.

“We have a teleradiology system in place now for CT, MR, nuclear medicine, ultrasound, and digital fluoroscopy,” says George R. Burns, RT(R), director of radiology services. “We are starting to archive for the day when we have a PACS.”

Even though TITUS’ four radiologists read all studies on film, images in CT, some cardiac studies, and digital fluoroscopy are given to patients or sent to referrers on disk.

Burns says he works with the TITUS information services staff to make sure that all purchases of peripheral equipment are DICOM-complaint and compatible with existing equipment. “Everything I buy is DICOM ready, and the IS [information services] department has verified that. I think it helps to have our peripheral equipment comply in advance of our PACS. The more you can have archived and ready, the better off you are.”

Digitizersdevices that can convert analog images into a digital format that allows that material to be put on the PACSare a third important peripheral piece of equipment to make a PACS deliver information optimally. Digitizers are becoming less vital as new digital modalities replace old analog ones, so, like printers, digitizers are being phased out wherever possible.

“We really don’t use digitizers,” says SVH’s Fammartino. “In our remote facilities we have some. We have software we’re working on for long bone studies that will put them on CD. They will be digitized and brought on to the PACS that way.”

At RWJUH, says Stewart, there is one digitizer. “We digitize all outside mammography that comes in.”

Stewart says physicians requested the digitizer, which is often the case with peripheral equipment. “I have a list of 20 questions that I ask [the requesting] department,” she says. “Are you PACS compatible, DICOM compatible, how are you doing your DICOM storage commits?”

At Beth Israel Deaconess, says Quinlan, of four original digitizers three are still in use. “The question becomes what do you digitize?” Quinlan says. “You can’t digitize everything. We will digitize the oldest film and the most recent film and compare those to the study that is now on the PACS. Any other digitizing is done at the request of the radiologist. If a patient comes with outside film, that will be digitized for the PACS.”

Sometimes, Quinlan says, a referring doctor will ask that a patient’s studies be put on the PACS when that patient has never been to Deaconess. A policy has developed that those requests are denied. “If we have the patient on the RIS, we will digitize, but if the patient is not on the RIS, we won’t digitize, because that would come across the PACS as a broken study,” Quinlan says.

Quinlan says an overlooked but vital peripheral is a document scanner that puts text into a DICOM format with software. The scanner converts mammography and ultrasound checklist text printouts, for example, to go on the PACS. “Otherwise, you create a jacket with a bunch of papers and everything else is on the PACS. So, if the patient comes back years later, youthe radiologistwill not have those documents. But with this simple desktop scanner, the documents are now part of that image set.”

“DICOM is kind of like ice cream,” says Quinlan, “there’s vanilla and then there’s Rocky Road. That’s where the vendor plays a key role with these peripherals. When we’re going to buy an add-on, we make it plain what we have. If that doesn’t work, then that add-on vendor has to make it work. That’s where it gets challenging for us, getting one vendor to work with another.”

With new equipment already DICOM compliant, the need for DICOM converters is tapering off, says RWJUH’s Stewart. But there are still “little quirks” with DICOM between different equipment makers, she adds. “The pixel spacing is sometimes different, which makes measurement hard on the PACS. We have to know about that. We do a lot of testing when we bring in a modality, and we may have to do some mapping. We may have to tell the system where to look.” Without DICOM these days, nothing works well, Stewart says.

At SVH, Fammartino says, there have been problems with DICOM fields and some have had to be adjusted. “Now we get performance compliance statements, and we know what the DICOM capabilities are on each modality now.”

Peripherals demand attention, but they can make a PACS much more usable. As David Quinlan puts it, “These peripherals certainly do have bang for their buck.” 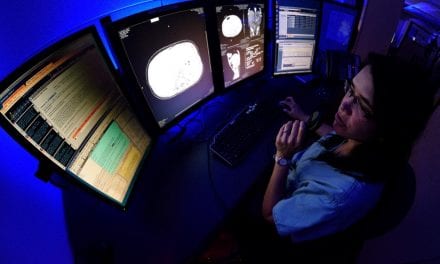