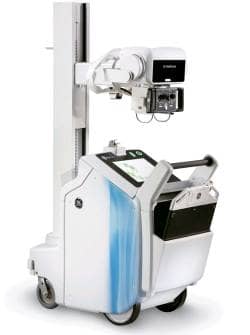 In June, GE announced the FDA clearance of their new fleet of user-friendly mobile x-ray systems, which include the Optima XR220amx, Optima XR200amx, and Brivo XR285amx. With this recent release, GE has brought the amx product line to the next level in terms of flexibility, usability, reliability, and accessibility for both technologists and patients.

The three products are built on the same technology platform and provide high-quality imaging along a continuum of digital processing capabilities. At one end of the spectrum is the Optima XR220amx, a fully digital system, which incorporates GE’s Flashpad detector technology, a durable and adaptable wireless digital detector, which operates on a dedicated frequency spectrum using sophisticated ultra-wideband technology. It is the same detector that is used on GE’s premium and mid-tier product lines. It is a fully capable and flexible detector that enables no compromise in imaging in a mobile environment.” Radiologists and technologists can expect the same level of quality of imaging coming from a mobile system as they do a traditional system,” said Dave Widmann, general manager of Rad/R&F, X-ray at GE Healthcare.

The Optima XR200amx is a digital-ready system, with all the built-in features of its fully digital relative, the XR220amx, and simply requires the GE Flashpad to transform it into a digital system. One reason for selecting a digital-ready system is its adaptability. A customer who isn’t ready to make that full investment to digital, but anticipates the need in the very near future, may find this option attractive. “Another set of customers are those who are looking to share Flashpad detectors across multiple systems. So in the morning, they would use the detector on one system and in the afternoon they would use it with another system. They would literally share that detector across different departmental uses so that they optimize the economics of the initial purchase price and get the best use and the best full utilization of those detectors,” said Widmann.

As customers seek to improve their workflow, the immediacy of digital imaging will become a necessity. “Many of our customers are really looking at digital, so the vast majority of the systems we expect to sell will be digital or digital-ready,” he said. However, for those customers who are not ready to go digital, there is the Brivo XR285amx. This is a more traditional analog system built on the amx platform.

When GE designed this new product line, they leveraged their many years of knowledge of mobile systems, having an installed base of over 18,000 units. According to the company, they also collaborated with their loyal customer base to improve upon a number of features that uniquely distinguish this product from the existing amx line as well as from its competition.

“At the end of the day, our radiologists expect high-quality imaging, and they don’t want to compromise just because the system is in a mobile environment. We have been able to accomplish that with the use of the Flashpad detector, and that is unique. The other key thing is that by gaining insights from technologists and embedding them right into our development process, we have a product that is easier for them to use,” said Widmann. This critical input combined with GE’s extensive history in mobiles has resulted in small additions and changes that make a big difference for those using the systems. “So now, for example, the lip of the back of the system is designed so that you don’t kick it as you walk behind it. All of this came from our customers. It was designed really as a collaboration with technologists for usability,” said Widmann. Additional user-friendly features include crevice-free surfaces that are easier to clean and onboard storage for wipes and gloves.

The unique ability of the Flashpad detector to charge while it is in the system and remain in standby mode while charging is very different than any other digital mobile design. “In fact, that is one indication how the digital portion of the system is designed right into the system, rather than an add-on to an existing analog system, which is the approach that other systems in the market take,” said Widmann. By not having to reboot the system while it is charging, it provides more immediate access and efficiency. “It’s also smaller, lighter, and more nimble, which improves maneuverability and enables us to really take what’s already been recognized as a reliable product—the amx product line—and make it even more usable for the technologist.”