Engineering researchers have developed a new technique for eliminating particularly tough blood clots, using engineered nanodroplets and an ultrasound “drill” to break up the clots from the inside out. The technique has not yet gone through clinical testing. In vitro testing has shown promising results.

Specifically, the new approach is designed to treat retracted blood clots, which form over extended periods of time and are especially dense. These clots are particularly difficult to treat because they are less porous than other clots, making it hard for drugs that dissolve blood clots to penetrate into the clot.

“We introduce nanodroplets to the site of the clot, and because the nanodroplets are so small, they are able to penetrate and convert to microbubbles within the clots when they are exposed to ultrasound,” says Leela Goel, first author of a paper on the work. Goel is a Ph.D. student in the joint biomedical engineering department at North Carolina State University and the University of North Carolina (UNC) at Chapel Hill.

After the microbubbles form within the clots, the continued exposure of the clots to ultrasound oscillates the microbubbles. The rapid vibration of the microbubbles causes them to behave like tiny jackhammers, disrupting the clot’s physical structure, and helping to dissolve the clots. This vibration also creates larger holes in the clot mass that allow blood borne anti-clotting drugs to penetrate deep into the clot and further break it down.

The technique is made possible by the ultrasound drill—which is an ultrasound transducer that is small enough to be introduced to the blood vessel via a catheter. The drill can aim ultrasound directly ahead, which makes it extremely precise. It is also able to direct enough ultrasound energy to the targeted location to activate the nanodroplets, without causing damage to surrounding healthy tissue. The drill incorporates a tube that allows users to inject nanodroplets at the site of the clot.

In in vitro testing, the researchers compared various combinations of drug treatment, the use of microbubbles and ultrasound to eliminate clots, and the new technique, using nanodroplets and ultrasound.

“We found that the use of nanodroplets, ultrasound and drug treatment was the most effective, decreasing the size of the clot by 40%, plus or minus 9%,” says Xiaoning Jiang, Dean F. Duncan Distinguished Professor of Mechanical and Aerospace Engineering at NC State and corresponding author of the paper. “Using the nanodroplets and ultrasound alone reduced the mass by 30%, plus or minus 8%. The next best treatment involved drug treatment, microbubbles, and ultrasound­—and that reduced clot mass by only 17%, plus or minus 9%. All these tests were conducted with the same 30-minute treatment period. These early test results are very promising.”

“The use of ultrasound to disrupt blood clots has been studied for years, including several substantial studies in patients in Europe, with limited success,” adds co-author Paul Dayton, William R. Kenan Jr. Distinguished Professor of Biomedical Engineering at UNC and NC State. “However, the addition of the low-boiling point nanodroplets, combined with the ultrasound drill has demonstrated a substantial advance in this technology.” 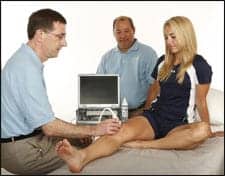 Carrying a Torch for Ultrasound 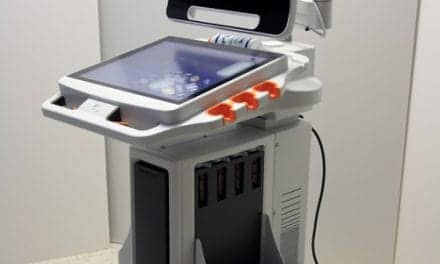 All the Dimensions of Obstetrical Ultrasound