A team of researchers at the University of Virginia Medical Center (UVA) in Charlottesville, Va, is using microbubbles injected into the bloodstream with contrast-enhanced ultrasound to, among other projects, detect cancer. Early results of their work with animal models show that scientists can detect cancer using the ultrasound contrast agents targeted to abnormal blood vessels that reside within tumors.

This work in cancer detection is just one area of interest for Jonathan R. Lindner, MD, associate professor of medicine at UV and a cardiologist on UV’s faculty. He also is a researcher in the area of coronary artery disease and myocardial perfusion, and beginning to venture into molecular imaging with the aid of ultrasound contrast agents.

Lindner received his MD degree in 1990 and trained in internal medicine at the University of Texas Southwestern Medical Center (Dallas). u Medical Imaging spoke with Lindner about his work and the potential opportunities for ultrasound contrast agents.

How far along are you in exploring skeletal muscle perfusion imaging?
We have been pretty successful thus far in defining some of the important vascular actions of insulin. I have been teaming with a diabetologist and endocrinologist named Eugene Barrett (professor of medicine), who is also president of the American Diabetes Association this year. We continue to study microvascular abnormalities in diabetes in both animal models and patients, with the goal of developing new ways to identify and treat patients at high risk for microvascular complications.

Do you work with many vendors on contrast agent development?
Yes, we work with several manufacturers of contrast agents, such as Bristol-Myers Squibb, Point Biomedical, Amersham Health, and Bracco Diagnostics. The rapid advancement of this field has largely been a result of the cooperation between engineers at the ultrasound system manufacturers, the pharmaceutical scientists, and individual clinical researcher groups at academic centers.

Jonathan Lindner, MD (front), is conducting a variety of research projects with Christopher Lewis, MD, a cardiology fellow at the University of Virginia Medical Center.

We have used this technique to answer basic questions in terms of how capillaries play a role in normal responses in blood flow and how they play a role in coronary artery disease. Also, we have been able to study how diseases such as diabetes and hyperlipidemia affect blood flow at the capillary level.

Much of my research has been in developing methods for molecular imaging. Dr Klibanov and I have developed in our laboratory contrast agents that bind to specific molecules that are expressed in regions of disease. We have developed microbubbles that target white blood cells and endothelial adhesion molecules in areas of inflammation and, most recently, angiogenic blood vessels.

Angiogenesis is the growth of new blood vessels from existing ones. For this purpose, we have targeted microbubbles to bind to the endothelial cell lining of neovessels. One reason we are doing this is to study responses to ischemia, or reduced blood flow. There is currently great interest in promoting angiogenesis for people who cannot undergo revascularization procedures. We also are using this technique to diagnose tumors.

What is the link between angiogenesis and tumor detection?
For a tumor to grow beyond a certain size and be aggressive, it must have a rich angiogenic response. If you can image angiogenesis, then you can detect tumors and metastases at an early stage. There also is prognostic information. The degree of angiogenesis correlates with the rate of tumor growth and the likelihood for metastasis and invasion. Additionally, by assessing the amount of angiogenesis, you may be able to predict response to new anti-angiogenic drugs that are being developed for treating tumors.

Will contrast agents be able to go beyond tumor diagnosis to treatment?
Right now, the contrast agents are just for diagnostic purposes and to assess the response to therapy. Eventually, I think we will use these agents for treatment. There are several companies and research groups, including our group, that are very interested in developing microbubbles that can be used for drug and gene delivery. The theory behind this is to release drug or gene payload by destroying microbubbles with a high-power pulse of ultrasound. If you can combine bubbles that bind to the surface of blood vessels with an ability to deliver drugs and genes by rupturing them, you may have a very specific way of delivering drugs or genes to diseased tissues.

It seems many health care providers offer differing views on the value of contrast agents. How prevalent and beneficial do you see contrast agents being in the health care setting?
The amount of use and perceived benefit for ultrasound contrast agents in echocardiography is variable from institution to institution. There are some places that never use them and other places that use them routinely, especially for stress echo or ICU patients. Over the last couple of years, some of the technological changes in ultrasound machines and improvements in the ultrasound modality have improved image quality considerably. So the number of studies that we would call technically inadequate or difficult to interpret has declined over the last decade.

Still, there are many patients we cannot get all of the information on. Typically, these are patients who are obese, have lung disease, or are on mechanical ventilators. In those patients, ultrasound contrast agents help the most and can actually be cost- and time-saving.
Whether to use contrast for LV cavity opacification also depends on the question being asked by the physician. There are situations where it is critical that every single myocardial segment can be visualized and interpreted with confidence. This is the case when echocardiography is performed to assess LV function, to evaluate for wall motion abnormalities in a patient with chest pain or congestive heart failure, or to diagnose ischemia with stress imaging. It is in these situations that contrast has the greatest impact.

Still, there is a relative underuse of the agents. Until recently, contrast agents were not reimbursed 100%, so contrast echocardiography was a cost burden. There has been a lot of advocacy from the American Society of Echocardiography (Raleigh, NC) to institute change in reimbursement so that this is no longer the case.

The second hurdle, which we still face, is training how to perform contrast echocardiography. It requires a bit of knowledge in terms of the ultrasound imaging parameters to obtain optimal images. A lack of just the basic amount of training leads to rather unimpressive images and a low likelihood that you will incorporate contrast into routine practice.

Microbubbles behave differently than tissue in an ultrasound field, largely because of their compressibility. This compressibility causes microbubbles to oscillate in a nonlinear fashion, and even to be destroyed, in an ultrasound field, thereby producing strong acoustic signals at fundamental and nonfundamental frequencies. You can improve your microbubble signal relative to background tissue signal by filtering for non-fundamental frequencies since tissue gives relatively less of these signals.

The second breakthrough that has helped — especially in the realm of perfusion imaging — has been the use of techniques that subtract background signal. These advances allow the user to completely subtract tissue signal and leave nothing but bubble signal. This can be done offline with image processing or online with multipulse signal processing techniques.

These technologies are available on virtually all systems being released today. Each of the ultrasound manufacturers has a vested interest in improving technology even further. They see that the future of perfusion imaging is very important, so they continue to work on all of these things.

Ultrasound system manufacturers always have developed systems with an eye toward contrast agents. Did it seemed a matter of time before the agents caught on?
The field of contrast ultrasound has come a long way in a relatively short period. Until the mid-1990s, there was no myocardial perfusion imaging from intravenous injection of contrast agents. Still, I think there is more to be done to improve microbubble signal over tissue and to reduce artifact as well.

What do you see on the immediate and long-term horizon for contrast agents in terms of novel applications?
I think the next important step is the general acceptance and use of myocardial perfusion imaging in general practice for viability assessment and detection of coronary artery disease. This will be a major accomplishment since, compared with LV cavity opacification, myocardial perfusion imaging requires much more technical expertise and education. The contrast ultrasound technology is well suited for this application since ultrasound is already ubiquitous and many facilities have ultrasound systems, the information is available immediately to the interpreter, and its temporal resolution is superb.

In the far horizon, I believe there is great promise for molecular imaging. Targeted contrast agents have been developed not just for inflammation and angiogenesis but also for thrombus imaging. This opens a whole new realm of potential therapeutic applications since the acoustic disruption of microbubbles can facilitate clot dissolution.

An indication of how viable some of the applications have become is, if you look back to the 1990s, there were just a handful of people doing research in contrast echo. There has been an explosion in the number of groups that have been using it to answer clinical questions and in preclinical trials.

TECHNOLOGY: ULTRASOUND ON THE MOVE 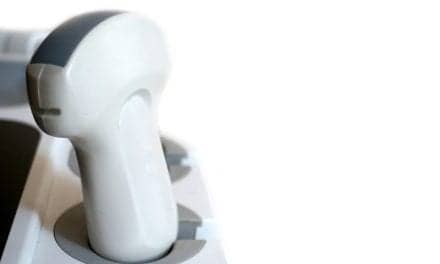 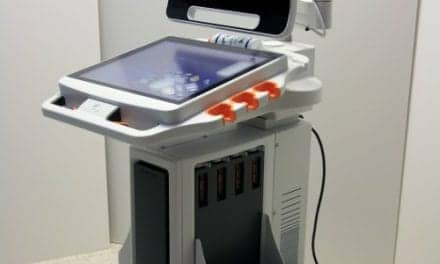