Money and space considerations are still the main reasons that some facilities continue to forego fixed imaging units in favor of mobile units. For facilities looking to avoid a large initial capital outlay, contracting or leasing mobiles can be an ideal way to keep up with new technology and gauge volume and reimbursement potential. Administrators can later use the accumulated data to make or reject an outright purchase.

In situations where there is just not enough space, mobile units are an inexpensive alternative to new construction. Where construction is already underway, mobiles can also be an effective interim tool.

Radiology manager Mary Reiter, RT, has used mobile CT and MRI throughout the past decade. “Before leasing our first CT scanner, we looked at our numbers and found we did not have the up-front money for an actual purchase,” says Reiter, who works at 54-bed Stewart Memorial Hospital in Lake City, Iowa. “We ended up leasing a CT scanner for 5 years and paying a monthly fee as opposed to a per scan fee. We could have purchased at the end of the 5-year lease, but we opted to let the equipment go because we wanted to upgrade to spiral CT.”

The first high-field, fixed MRI imaging systems cost in excess of $2 million with substantial capital outlay for site preparation. Today, a low-field, open-bore MRI costs about $500,000 with lower operating costs and expenses. But even as prices go down for some types of MRI, initial costs are still prohibitive for many smaller institutions. “With MRI, going mobile was both a cost issue and a space issue,” Reiter says. “Our MRI volume was not high enough to warrant an in-house unit, but we did not have space for it anyway. Now an 18-wheeler trailer houses our mobile unit and sits just outside the hospital — all hooked up to our phones and paging system. It is working well and we are making money on MRI.”

Reiter acknowledges the higher long-term costs of leasing, but says she likes the flexibility to upgrade combined with the lower initial costs. “Our mobile MRI company charges us per procedure. If volume goes up, discounts kick in,” she says.

Reiter’s hospital normally does 20-25 MRI scans a month on a Tuesday and Thursday schedule. On Wednesday, the trailer is hauled away for use at another hospital. Just 5 years ago, it took more than 2 hours from arrival to prepare a mobile MRI unit for use. Since the magnet can now be fully energized during travel, it takes only about 12 minutes to get the machine up and running when it returns on Thursday.

Reiter says she might consider a purchase if volume ever consistently met 40 procedures a month. For now, however, mobile services are meeting financial expectations and saving patients a 45-mile drive to the nearest fixed units.

At 74-bed Lee Memorial Hospital in Dowagiac, Mich, Radiology Director Steven D. Walters, MS, RT, says an outright MRI purchase is cost prohibitive. “Michigan has a certificate of need (CON) process and our volume would probably not warrant the expense for a fixed unit,” Walters explains. “When I first got here 2 years ago, we were doing about 14 MRIs a month. Now we are doing close to 50 a month — all on our mobile unit, which houses a 1.5-tesla magnet.”

Following last year’s Health Care Financing Administration (HCFA) approval of five new indications for positron emission tomography (PET), officials at one Southern California hospital decided to add mobile PET as a way of gauging the market and testing the acceptance of payors. “Historically, with PET, it is a little difficult to justify the million-dollar purchase outright; for us, this is a way to see if the volume and reimbursements justify a commitment,” says Jean Westmacott, RT, director of imaging and radiation oncology at the John Wayne Cancer Center at Saint John’s Health Center, Santa Monica, Calif. “We are projecting our break-even point with mobile at about 26 reads a month, but I would want to see between 35 and 40 uses per month before purchasing a fixed unit.”

The John Wayne Cancer Center required no capital outlay before starting mobile services, and Westmacott says the mobile contract is not shared by other hospitals or medical groups. “We are contracted on a per-day basis (Mondays and Thursdays from 8 AM to 4 PM). We wanted the days spaced out so we could provide service without a long wait in between,” Westmacott says. “It is a 5-year contract with a stipulation that this would have to be financially viable for the institution to continue mobile services. So if we reached a point where we could not continue, we left ourselves an out.”

“If reimbursements and fee schedules went down, we could also exercise a termination clause,” Walters says. “But right now, I don’t see that happening. With more and more insurance companies realizing the significance of MRI, the trend seems to be more inclusive and less restrictive.”

When staff at St Luke’s Hospital and Health Network in Bethlehem, Pa, faced an unacceptable MRI backlog, they decided to purchase another MRI unit. However, without enough space to expand their current MRI suite, construction became necessary. “Building out requires state approval and the state is currently backlogged between 3 and 4 months — and that’s just to approve our plan,” explains John Posh, RT, network MRI manager at St Luke’s. “And then you have to deal with the actual architects and builders and getting it all done. We’re looking at a 9-12 month project, so we have chosen to go with the mobile unit as an interim solution. The mobile buys us the freedom to increase output, validate our need for a second unit, and take care of our patient needs without a large capital outlay. It gives us the breathing room to plan properly and avoid rushing.”

St Luke’s will use the unit for 6 months — 24 hours a day, 7 days a week. When the 6-month contract is over, Posh can give the machine back or renew month to month. If he decides to give it back, he advises there will be no turning back.

“We actually had to hire a rigging crew to put this mobile trailer in. They had to lift it up with a forklift and a crane because a tractor trailer could not get it here,” Posh says. “It had to go over a hump on the driveway and down a 50-degree grade, so once it’s out, it stays out.”

As director of imaging and radiation oncology, Westmacott did a need-benefit analysis and looked at some of the key physician offices in her area to get a perspective on the potential for PET referrals. The numbers helped her make reimbursement assumptions and justify a recommendation to use mobile services. “I worked with finance to come up with a proposal, which I eventually submitted to our operations group and senior management for final approval,” Westmacott says. “As far as billing goes, once your site has been approved by Medicare and the Joint Commission on Accreditation of Healthcare Organizations, there is no difficulty in billing.”

Posh recommends seeking advice and guidance from outside the facility before going ahead with any mobile plan. “That doesn’t necessarily mean you have to pay a consultant,” he says. “You could call a colleague who has done mobiles or access MRI technologist list servers on the Internet.”

Posh says code response issues are additional factors to consider. “If a patient has an anaphylactic reaction, you cannot just call a code and everybody to know where the MRI radiology department is,” Posh says. “This is a temporary or portable facility that comes 1 or 2 days a week and many people are aware we even have it. Also, most trailers have enough room for about three people, so you can’t just rush in a bunch of people and perform an emergency procedure.”

Any hospital using mobile services is responsible for documenting the competency of all technologists. If the mobile company supplies its own technologists, it should also ensure that the technologist has the proper credentials. As an additional quality control measure, Reiter surveys all her mobile unit patients on a quarterly basis and brings up any complaints directly with the company.

In addition to being approved Medicare sites, some facilities may also need to amend their radioactive materials licenses to include mobile PET and amend the facility license to include PET as a service. Posh also warns that trauma center helicopters flying over the mobile unit could disrupt a unit’s electromagnetic fields.

“Working with our mobile provider has really been a win-win situation,” Walters says. “They are cognizant of the fact that we may have inpatients who have to be added and they arrange the schedule accordingly. They have been good at keeping me informed of any equipment problems and will readily bring in a replacement rig if the original magnet should go down. As far as reports and diagnoses coming back, it tends to be a 3- or 4-day turnaround.

“In a small community of less than 8,000 people,” Walters adds, “it is great to offer this convenience to our patients so they don’t have to travel out of town.” 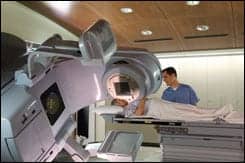