The Healdsburg District Hospital, Healdsburg, Calif, has state-of-the-art imaging equipment, including ultrasound and CT, but only 19 beds. By having the equipment in the tiny wine country community, the mix of retirees, casino goers, and long-time vintners don’t have to make the 30-minute drive to a larger facility in Santa Rosa.

The scene is similar at the 85-bed New Milford Hospital in New Milford, Conn. Patients can get any number of exams in the rural town instead of driving 20 to 40 miles to a larger facility.

Aiding both community hospitals is the use of teleradiology. What once was simply a source of nighttime assistance now is actually extending the service reach of small and rural medical centers in an era when many facilities are looking for ways to cut back.

Ten years ago, Healdsburg’s hospital was bustling, according to Patrick Browning, MD, who works with the Redwood Regional Medical Group, which oversees the hospital and two others in the region. “Unfortunately, as the medical economic climate has changed, an increasing number of community hospitals have fallen by the wayside. So far, this facility is holding on pretty well. It was very vibrant at one time, and I think they hope to bring it back to its former glory.”

That is accomplished, in part, by continuing to offer the many imaging services it offers today.

“In the old days, someone would actually physically drive up there a couple of days a week and cover radiology,” Browning said, adding interpretations are necessary for CT, ultrasound, and as many as 50 plain films per day. “As the field of radiology has changed and we’ve gotten away from fluoroscopy, patients would come down to Santa Rosa. It doesn’t make sense to send somebody that distance. Over the last couple of years, we’ve fully transferred to digital.”

A unique arrangement with StatRad ties the medical group together on a server. If it allowed for night reads only, that would have satisfied one big need for the small organization. But the teleradiology company and the hospitals struck a deal to make use of the computer servers 24/7. “They did a great job of hooking those modalities up—CT and ultrasound—so that we’re able to read them remotely using the servers,” Browning said. “Increasingly, we’ve been staffing Healdsburg with people who are paying attention to it, but not physically there.”

“Our group provides all of the physical interpretations, so we have a professional agreement with the hospital to staff it with the radiologists and oversee both inpatient and outpatient,” said Paul McGuire, MD, a radiologist with NE Rad. “We have a typical hospital-based practice with a full gambit of medical imaging services.” Overnights are handled by Imaging On Call. During the day, however, there’s a mix of on-site and teleradiology reads.

“We aspire to offer to the community—in spite of the fact it is somewhat rural—everything that’s offered at a tertiary center,” McGuire said. “We have expertise across the various subspecialties. There are four neurorads, we have a musculoskeletal radiologist, so although we don’t staff with everyone on staff all the time, they’re a click away with the PACS and teleradiology capabilities. I think that’s a model that works.”

Hospitals in rural settings are good at generalizing, but it is often more difficult to offer subspecialty fields. “It’s important to the community to have services close by when it’s critical,” McGuire said. “And even when it’s not critical, convenience is important.”

But economics can sometimes hinder that effort. Recruiting radiologists to remote locations can be difficult without offering big financial incentives. In Healdsburg, which is in California’s picturesque wine country, and New Milford, an area of Connecticut that McGuire calls “bucolic, a lovely area,” recruiting isn’t as difficult as in some other areas. Still, each offers something to a candidate that urban imaging centers rarely can: The chance to do it all.

“There are professional and personal considerations that play into it,” he said. “One of the nice things about practicing in a rural setting is there’s a beautiful environment in which to raise your family, a beautiful countryside, so the people who tend to be attracted have different hopes for their life.

NE Rad looks for candidates who can offer a broad background as well as unique expertise when recruiting. “Our most recent recruitment was for a body imager and prior to that a body imager with musculoskeletal expertise. For me, I sort of knew that I’d be able to practice neuroradiology and also enjoy radiology outside of neuro, so it allows me to do both.”

Browning, who holds a master’s degree in the history of medicine from the University of California, San Francisco, said the economic pressures on hospitals in general, and radiology specifically, are unprecedented—and far from over. Making budget cuts is only part of the solution. Building unique partnerships to broaden the number of services offered and spread the costs over several locations is one successful means of surviving.

“The smart hospitals I think will be looking for ways to increase margins,” he said. “The technology is definitely there; it’s just a question of making the best use of it.”

Dan Anderson is a freelance writer for Axis Imaging News. 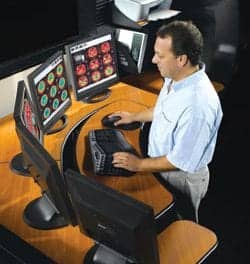