A team of physicists in China is using a statistical technique called ghost imaging to work toward taking clear x-ray photographs with cheap cameras and less cancer-causing radiation than conventional techniques, reports Science.

In order for ghost imaging to be viable in medicine, Wu says, researchers must show that the total x-ray dose needed for an image is lower than with a conventional system. One ghost image requires thousands of exposures, and the x-rays add up. In addition, the more detailed the object—for example, a human body—the more exposures you need. However, Wu says the x-ray intensity per exposure can be made low enough that ghost imaging may come out ahead.

Doing so would be important, Shapiro says. “If you could reduce the amount of x-ray exposure that women suffer in getting mammograms, or in chest exams, that would be a big deal,” he says. But image quality still needs to be improved, he says. “It’s got to be a good image.”

Get the full story at Science. 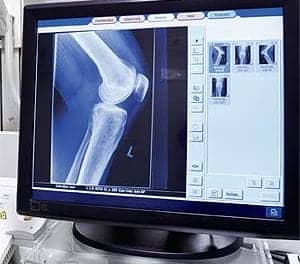