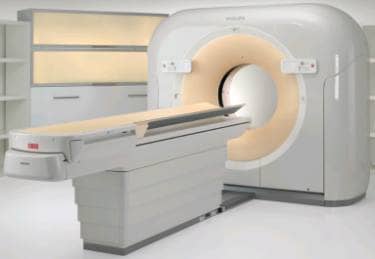 The Ingenuity CT from Philips Healthcare includes features like iDose4, SyncRight, and the Intellispace Portal.

In The Republic, Greek philosopher Plato introduces the Allegory of the Cave, in which a group of prisoners inside a cave can see only the shadows of objects. After one of these individuals is able to escape, he tells his fellow captives that the real world is actually vibrant with color.

Applying this parable to the world of radiology, Methodist Hospital in Houston has teamed up with Ziosoft Inc to deliver images that break free from the accepted mold. The facility’s Plato’s CAVE, or Computerized Augmented Visual Environment, uses Ziosoft’s PhyZiodynamics solution to create a virtual patient, building from the person’s existing DICOM studies.

“The idea is that we are all prisoners of the current standard way that we look at things, and that we need to look at our world differently,” said E. Brian Butler, MD, chairman of radiation oncology and founder of Plato’s CAVE.

Butler explained that through high-end computers and sophisticated graphic cards, his team created “a virtual patient that we can interact with on a virtual surgical table or a virtual radiation therapy table.” The hope was to build a preflight surgical or radiation therapy simulator, eventually incorporating virtual tools and apps that would interact with the patient. Physicians can now take a fully dimensional look into a patient’s internal anatomy and visualize, in multiple dimensions, a plan for surgery or other treatment.

Before Ziosoft entered the picture, Methodist’s CAVE was a clinical radiology-based interactive three-dimensional, volumetric environment. “We were building new tools to interact with the three-dimensional virtual patient,” said Paul E. Sovelius, cofounder and architect of Plato’s CAVE. “Ziosoft builds on other disciplines for increased computational power with new algorithms and applications that would allow us to look at anatomical structures in four dimensions.”

According to Sovelius, PhyZiodynamic technology enables an evaluation of normal and abnormal anatomy in four dimensions, which in turn allows clinicians to understand the disease process in a completely different light. “[O]rgans don’t just move in the anterior/posterior, right and left dimension,” he continued. “Different parts of an organ may rotate differently around multiple axes within the same organ.”

Methodist searched for a vendor partner that would allow for the production of 3D images with high fidelity motion coherence. To narrow down its list of contenders, the Methodist team scheduled various meetings, where company representatives could demonstrate the sophistication of their programs. With guidance from Sovelius, a clinical and scientific visualization expert, as well as anatomical clinical expert Nancy Huynh, the hospital ultimately found that Ziosoft met its needs. Its PhyZiodynamic solution will be used to produce true-fidelity 3D and 4D images based on CT, MR, and PET scans of the brain, lungs, and other organs.

“I believe we are changing the way that we are looking at data and certainly how we interact with new versions of the data,” Butler said. “We are trying to look at the patient in a completely visual sense as opposed to a textual sense. Virtual interaction occurs before real interaction occurs. In the future, we hope to fuse and link the virtual world with the real world.”

According to Butler, the collaboration with Ziosoft opens the window for a whole host of exciting possibilities.

“I believe that we are at the tip of the iceberg,” he said. “This technology will only improve and affect all fields of medicine—from cardiac valve surgery to radiation therapy, liver resections, heart lung transplants, reconstructive surgery, as well as head and neck procedures. It will affect all aspects of medicine.”